We’re starting off this year with Linda Le. She’s hot, she’s funny, and she’s got some serious thoughts on the vampire/zombie Armageddon. 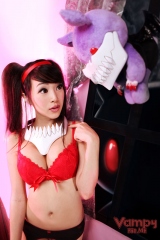 It’s a new year and that means it is time for a new YouBentMyWookie Girl of the month. We had some of the hottest and geekiest girls grace the pages of YBMW last year, but 2010 we are raising the bar! We’re starting off this year with Linda Le. She’s hot, she’s funny, and she’s got some serious thoughts on the vampire/zombie Armageddon. Check out her interview and her gallery, but be warned: We take no responsibility for any damage your drool might do to your keyboard.

Favorite TV Show:
Man vs Wild, but of all time Liquid Television.

Favorite book: :
The last I read was Pride Prejudice and Zombies

Do you read comics? :
Yes but of course!

What’s your favorite comics? :
Bone by Jeff Smith, and Faust

Who are your favorite artists?:
H.R. Giger is my favorite as well as Junko Mizuno.

Who is your favorite Superhero? :
Of course Psylocke, she is badass.

What were your favorite cartoons growing up and why? :
I grew up watching He-man, Transformers, a lot of anime since it was the big thing in the 90s, Ranma 1/2 was my super fav. 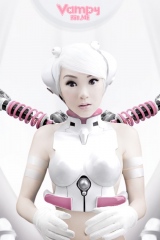 What cartoons do you like to watch now? :
I enjoy Death Note, it never gets boring.

What toys did you play with when you were a kid? :
Transformers and He-man toys. I never had any girl toys, except for Rainbow Brite and even that was scarce.

Was there ever a toy you really wanted as a kid, but were never able to get? :
Well TMNT “Movie Star Turtles” Playmate line, in Leonardo. It was really hard to buy him then.

Do you collect toys now? :
TONS! It’s not even funny.

What kind of toys? :
OK, anything by Junko Mizuno, all kinds of kubricks, I’m really digging all the new Vocaloids coming out and Final Fantasy toys as well.

What did you want to be when you were growing up? :
Interior Designer or some sort of artist.

How did you get into vampires? :
I always liked them since I read about Lady Bathory in middle school. Haunting and chilling but intriguing.

Seriously… Twilight? What’s the deal with that? :
No, I never was into twilight. Nothing against people who love twilight but, I grew up reading about real vampires, wicca, etc. it just is so different and interesting. I like everything about the unknown.

Edward Cullen, Lestat, Spike, Christopher Lee as Dracula. Which one of these vampires would you most want biting your neck? : The legendary DRACULA of course!

Who would win in a fight between vampires and zombies and why? :
Well that’s a tricky one, but from my knowledge I would say Vampires. Although if you were considering an apocalyptic world where there were no humans whatsoever, just vampires and zombies, I think zombies would win. Vampires, having no blood to gorge from host humans they would wipe out while the zombies keep on searching for brains for many years to come. Although if a vampire bites a zombie, that would be a pretty awesome mix! Zombvamp’s would be nearly hard to kill. 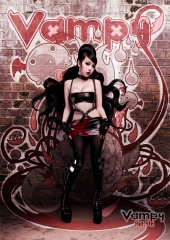 If you could have any Superpower, what would it be and why? :
To read people’s minds, so I would know if there was spinach stuck in my teeth.

What do you look for in a guy? :
Creativity and humor, I love a guy who can make me laugh. Oh and good taste in music!

What is the strangest come on you’ve ever gotten from someone? :
A person said, “Hey are you ____’s sister? I like you, by the way you look just like him when you smile” 0__0

How did you get into modeling? :
My friend asked me to be part of his alternative modeling site, and it has been gung-ho ever since.

What can people expect to see on http://www.vampybit.me? :
Tons of event coverage, quizzes, new shoots, funny videos, and more,

Do you have any advice for the cool, yet geeky guys out there that just can’t seem to find a woman who appreciates their love of comics or toys? :
Oh goodness, there are TONS, I would suggest just being yourself, and letting people know what you love, and someone will find YOU. You don’t have to search. Law of Attraction is real =)

What projects do you have coming up and where can people go to see you online or at live events? :
There are a few things lined up for me, like a book with another fellow artist, but a lot of the things only time will tell, I just hope you guys come for the ride.

Thanks again to the beautiful and geektastic Linda Le. Be sure to check out her gallery below and visit her at her new site: http://www.vampybit.me.

3 thoughts on “YBMW Girl Of The Month: Linda ‘Vampy’ Le”