Discussing everything from twin ESP, comic books, to what it means to be a real geek. 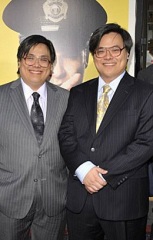 YouBentMyWookie recently had the opportunity to speak with actors John and Matthew Yuan, who starred in the new hilariously funny Seth Rogen movie, “Observe and Report.” The Yuan brothers play firepower-trigger happy twin security guards not too foreign from their real life firepower-trigger happy off-screen selves. In this interview, we got a chance to pick some twin-brains and go over a barrage of topic ranging from twin ESP, comic books, and what it means to be a real geek.

WOOKIE: You guys play yourselves in the new comedy Observe and Report which opened last weekend, any chance we’ll see you guys in future roles playing the Yuan twins? A spin-off maybe?

MATTHEW YUAN: You guys might see us again, but not as the Yuan twins. As twins, certainly. It’s kind of hard to hide that, but we think that we’ll make the screenwriter give us nifty, fictional names for our next outing.

JOHN YUAN: We’ll keep showing up in movies for as long as people want to watch us. But a spin-off of Observe and Report? Unless everyone who was originally involved got on board, probably not.

WOOKIE: Who do you think will win in a battle for mall cop supremacy, Paul Blart laced with an adamantium skeleton or Ronnie Barnhardt and his never ending wit?

JY: You know, we like both apples and oranges, so we try not to compare them.

WOOKIE: According to the popularity charts on IMDB, John’s popularity is up
156% while Matt is only at 140%. John, how does it feel to be the more popular and successful brother?

JY: I think it’s more of a case of alphabetical laziness at work than anything else. My name begins with “J” and according to the Pew Research Institute, most people don’t like to go beyond “K.” So I kind of lucked out. 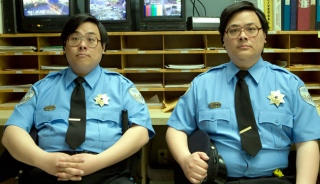 WOOKIE: As fraternal twins, do you guys ever experience any ESP? If John were to fall down a well, would Matt sense it right away and go for help?

MY: No, we didn’t get any of that twin-ESP stuff.

JY: But we did get some of that twin-pyrokinesis.

WOOKIE: Do people ever confuse the two of you?

JY: Oh God, yes! If we had a nickel for every time someone thought we were Brad Pitt standing next to a mirror, we’d be millionaires.

WOOKIE: How are you guys different?

MY: John’s designs tend to be sturdier while mine tend to be more articulated and complex.

WOOKIE: As twins, do you get mad when people like Lindsey Lohan get to play
both parts of a twin role? That’s got to be like traditional Hollywood twin-ism or something right?

MY: It doesn’t bother us at all.

JY: What does bother us is that you brought up Lindsey Lohan in the context of twin-ism when you could have brought up Jean Claude Van Damme instead.

WOOKIE: So, not only were you guys just in a major movie, but you’re both now official “unofficial” spokesmen for Booms! Studios. How’d that happen?

MY: Actually, we’re friends with their marketing director, so this whole thing is nepotism gone horribly awry. 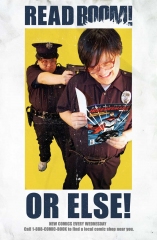 WOOKIE: What are your favorite Boom comics?

JY: Well crap, how long have we got to answer that?

MY: The Unknown is really pretty darned cool.

JY: Oh wait! That hasn’t come out yet.

MY: Not for the proles, you mean.

JY: Well, that’s the perk of being an unofficial spokesman.

MY: But the quick answer is, Potter’s Field, The Unthinkable, Irredeemable, and if we could see more of Left on Mission, we wouldn’t complain.

WOOKIE: Are there any other titles you guys are currently reading?

JY: Green Lantern and Green Lantern Corps, anything Evan Dorkin does, The Incredible Hercules is pretty neat, and the whole War of Kings crossover thing.

MY: And let’s not forget anything Dan Slott, Tom DeFalco, or Mark Waid writes. Those guys can do no wrong.

WOOKIE: Does your twin geekiness extend any further outside of comic books, Zombies and D&D? You guys don’t regularly attend Star Trek conventions or collect My Little Ponies or anything do you?

MY: We don’t attend Star Trek conventions, but don’t think we haven’t thought about it.

JY: We watch Doctor Who and Battlestar Galactica. We used to play Magic: The Gathering (anyone who says we still do is a filthy liar) and Warhammer 40,000 until the miniatures started costing an arm and a kidney apiece.

WOOKIE: With technology, the Internet and comic book movies populating our daily lives, do you think this is a great time to be a geek?

MY: Not really. Geekiness used to be something to be ashamed of and those who couldn’t hack it became football jocks or cheerleaders. 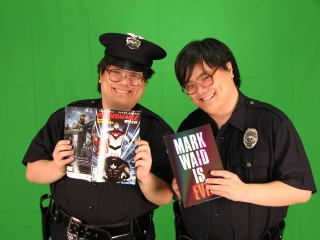 JY: But with the widespread diffusion of geek culture, you have a bunch of geek-chic poseurs who can glean just enough off of Wikipedia to fake a conversation.

MY: No kidding. The next person with straight teeth, good skin, and the proper height-to-weight ratio that tells us he’s a geek because he likes Batman is going to get punched in the gonads.

WOOKIE: What are your take on comic book movies? Which would you like to see adapted?

MY: As far as adaptations we’d like to see? Maus, Hectic Planet there’s a bunch, actually. But we only want to see them adapted properly or not at all.

WOOKIE: Are there any upcoming comic book adaptations that you guys are looking forward to seeing?

MY: And the rumored Battle Angel Alita adaptation is keeping us up nights.

WOOKIE: If someone made action figures of the Yuan Twins, what kind of action features or accessories would they come with?

MY: Guns that were bigger than our heads.

JY: And a golf cart.

WOOKIE: Anything else you want to say to your fans and groupies with twin fantasies?

JY: Um… if it’s relatively harmless, we’re on Facebook, but if it’s kind of messed up and German, keep your fantasies to yourselves.