The general crowd consensus was that this Celebration blew the last one out of the water like Lucas blew David Prowse’ ghost out of the ending of Return of the Jedi.

If you’ve got an abnormally high mitichlorian count then there is a good chance that you were in Orlando, Florida this past weekend at Star Wars Celebration V. Now, I’ll admit that this show wrap up will be pretty truncated as I was only able to attend on Friday. Saturday, I was too busy passing out like a punk ass bitch on the floor of the doctor’s office… but that is a whole other story all together. From reports that I read, Friday was probably the slowest day of the show, but that was fine with me. It gave me a chance to see everyone and everything without getting poked in the eye with a light saber. 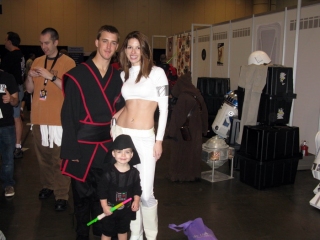 Celebration is, near as I can figure, what hard core Star Wars fans are hoping that heaven will be like. I mean the only thing that could have made it even better would be if George Lucas agreed to do some time in a dunk tank wearing a t-shirt that said, “I’m sorry for Jar Jar.” Alas, there was no dunk tank, just a kick ass interview between him and The Daily Show’s Jon Stewart and his on stage announcement that we can now toss out our other 12 copies of the trilogy because he’s releasing them on Blu Ray.

A little side note to fans, while one can only guess what madness he’ll insert into this new release, there is at least one guaranteed little gem… a previously unreleased scene from Return of the Jedi where Luke assembles his own light saber and officially becomes a Jedi Knight.

What really makes Star Wars Celebration such a great experience in comparison to other license specific cons like… oh… Botcon… is that you get the feeling that there is really more than just a dealer room and a few panels that cater to only the hardest core of fanboys and girls. There was some great programming for the kids involving the Clone Wars animated series and there were (from what I heard from people who were actually conscious) great fan panels where the stars of the films sat down and really got into what it was like making the films and how Star Wars has effected their life since then. 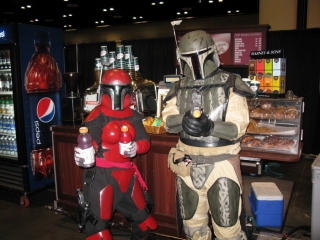 As for me, I can really only comment on what I saw on the show floor and it did not disappoint. I can only really think of one real complaint and that would be the official Merch booth. The team who put together the official merch for Celebration did a great job. There were some excellent shirts, buttons, Lando and Slave Leia Perfume… even a stuffed wampa with a removable arm. Most conventions I’ve attended, the official merch is pretty central, but for some reason they pushed these guys way into the corner and I just think that they deserved better placement than that. That said, I did make it over there and grab a couple show exclusives (including the elusive Lando Mustache) and we’ll have a contest for them coming up very soon on the site.

So what was it like on the floor? Well, there were definitely a ton of vendors, but most of them had some pretty cool stuff. I have to say I was pretty psyched to walk away from the Disney booth with my very own Donald Duck Shadow Trooper Action figure. What I really liked is that it didn’t just feel like a giant swap meet for Jedi wannabes. They really did put together a ridiculously interactive experience.

Woven through the show floor were more activities than you get at the average con. On one wall they were hosting regular Jedi demonstrations, complete with flipping and sword fighting dudes who were moving way too fast for my camera to touch them. Then there were the droids, the diorama of Hoth that you could help build and the several awesome life-sized vehicles, characters and scene displays that you could insert yourself into for a photo op or just share in the explosive happiness of the kid that just got to climb on a real speeder bike. The general crowd consensus was that this Celebration blew the last one out of the water like Lucas blew David Prowse’ ghost out of the ending of Return of the Jedi. 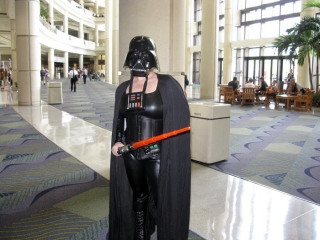 A very unique little bonus for this year’s Celebration came from the Geekwork G4TV in the form a a Hoth Themed Ice Bar that could be enjoyed by Jedi’s and Sith alike, so long as they were over 21. Stopping in there was like a nice little oasis from the crowd and the lines. The temp was cool and the most popular drink was definitely “Attack of the Shot.” While there was no trace of pseudo nerd extraordinaire, Olivia Munn, there were a couple of Hothtastic Ice Sculptures that made the trek upstairs totally worth it. 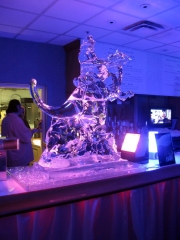 So, you’re probably wondering about the title of this little post… Just what exactly was I talking about when I mention the rise of Booby Fett? I was referring to costumes. Let’s face it, if you are a guy, you can get away with a store bought light saber and a bathrobe if you are feeling lazy, but female Star Wars fans take on their costumes like they’ve got something to prove. The result was more than just a bunch of Slave Leias in old costumes. No, we had all manner of bounty hunters, storm troopers, Jedi’s and various other characters. I just thought it was really funny that two of the most famous characters seemed to be female takes on Boba Fett and Storm Troopers… who I’m pretty sure would have all been cloned men in the movies…

I wish I could tell you more about the show, but the fever was setting in pretty hard by midday. I had plenty of fun and I’d happily go again, especially if Booby Fett will be there too.