Last night on G4’s “Attack of the Show” Mattel revealed their upcoming San Diego Comic Con 2011 exclusives. Not wanting to ever be out done, there’s a little something for everyone whether you’re a fan of Masters of the Universe Classics, Ghostbusters, DC Universe Classics, Voltron or Green Lantern!

The good queen of Eternia is finally here to complete the Eternos Royal Family. But Marlena isn’t coming empty handed! She includes not only her royal green dress with scepter and sword, but an interchangeable space helmet head, riffle and blaster pistol to transform her back into her fighting days as Marlena Glenn, heroic Space Explorer! And as an added accessory, Queen Marlena includes Cringer, Prince Adam’s loyal pet and secret identity of Battle Cat! Marlena is packed out as Queen Marlena for SDCC and as Marlena Glenn, Space Explorer on Mattycollector.com after the show. Each pack out includes all the parts you need for both figures, but each includes a unique bio specific to how she is packed out! Gets her first a SDCC and after the show only on Mattycollector.com. 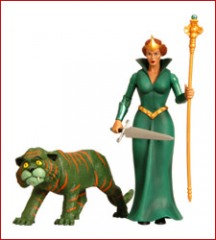 This show-accurate figure recreates the scene from the pilot episode when Robin, Aqualad, and Kid Flash discover the mysterious Project Kr, where the Light has commissioned “The Weapon.” Using Superman’s DNA – without his knowledge or consent – Cadmus has force-grown the Superboy, using telepathic Genomorph-Gnomes to make a virtual slave of Superman’s son. The cloning tank includes Superboy plus 3 telepathic Genomorph-Gnomes, and with the press of a button, the inside of the cloning tank lights up a glowing blue. This version of Superboy will be available at SDCC, then on MattyCollector.com. 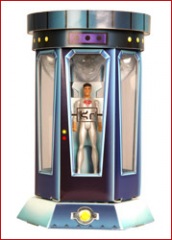 This fan-demanded character is available for the first time in the DC Universe and is the first ever DC Universe character to feature endoskeletal articulation! Vowing to protect the environment and his swamp home, Swamp Thing comes in a paper pulp mold of a Swamp Thing head and houses Swamp Thing himself! No ordinary packaging can contain Swamp Thing, so he’ll be packed in a shipper box with the Swamp Thing head peering out. He’ll be available July 15th here at MattyCollector.com, then at SDCC. Pick him up at SDCC and he’ll arrive with mini-figures of Un-Men Ophidian and Cranius! Note: Un-Men mini-figures are only available at SDCC and will not be sold with Swamp Thing on Mattycollector.com after the show. 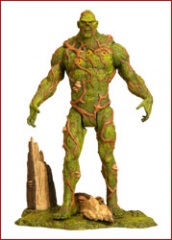 Stay Puft is the largest item ever made by Mattel and sold at SDCC, standing at over 20″ tall! Our favorite squishy villain is made from soft foam and features articulation at the arms, head and legs. A huge city diorama is included in the packaging – perfect for displaying your entire Ghostbusters collection! He’ll be available first at SDCC, then here on MattyCollector.com. 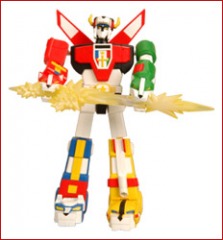 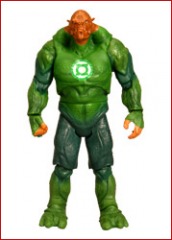 Carol Ferris grew up on the runway of Ferris Air, her father’s aeronautics company. As an adult, she became a pilot with a strong interest in running the family business. Tough and strong-willed, she works with Hal Jordan, her lifelong friend and childhood sweetheart. Hal is reckless and irresponsible—until Carol inspires him to find his courage and greatness as a Green Lantern. The Carol Ferris Barbie doll is dressed in her green flight suit and comes with her pilot helmet.
• Detailed costume: Working zipper on flight suit, pocket detailing
• Painted to likeness of Blake Lively
• Helmet features Sapphire logo and Star Sapphire icon.
• Articulated body for more Action hero posing
• Action figure inspired packaging, Unique for a Barbie doll. 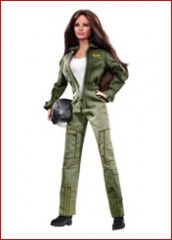 Polly and her friends love to dress up as Masters of the Universe heroes and battle out good vs. evil. Polly, dressed as She-Rah, and Kerstie, dressed as Frosta, are ready to take on Crissy as the evil Catra. Packaging brings the characters and story to life with dynamic illustrations and strong visual graphics that show case what these super heroes do best: fight for the forces of good.

Individual Characters Bios:
Polly as She-Ra: When it comes to dressing up for adventure, Polly loves to be the original Princess of Power. Armed with her Sword of Protection and an Etherian Shield, Polly is ready to tackle the Evil Horde and whatever action awaits!

Lea as Frosta: Lea may not have a cold heart, but when she dresses up as the Ice Empress of Etheria, she can freeze foes in her path. Armed with a magic wand that turns anything to ice, Lea is ready for her next adventure to save the day!

Crissy as Catra: Crissy has cat scratch fever as the mischievous and notorious Catra. When in her Horde disguise, Crissy is purr-fectly poised to make trouble for Polly and friends!

The Monster High product that will be sold at Comicon is a special Ghoulia Yelps collector doll dressed as Dead Fast. The doll comes with special collector packaging, is dressed in her costume, and also comes with a Dead Fast figure, comic book, and doll stand. See below for the talking points:
• Ghoulia Yelps is the zombie girl at Monster High and being that she is the smartest ghoul in school naturally she is a comic book fan. She’s on her way to Nekro Con dressed as her favorite zombie super hero, Dead Fast.
• Once he [Dead Fast] was just a face in the shambling crowd until he was pecked by a radioactive hummingbird giving him the power of super speed! Now he’s the zombie super hero Dead Fast!
• You can’t outrun zombie justice!
• She comes with a miniature Dead Fast action figure and a Dead Fast fan fic book that she wrote and illustrated herself. 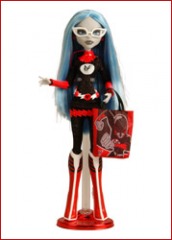 This Franken Berry™ cereal box with a Hot Wheels car inside will take you right back to being 7 years-old and watching Saturday morning cartoons. What car is inside? It’s the popular Dairy Delivery vehicle, of course, because you need some milk to go with your cereal! Shake the box and hear that awesome cereal sound coming from inside. 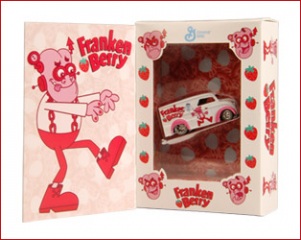 The second is a very cool exclusive from Back to the Future. Fans of the movie will know that this plutonium box is what Doc Brown stole from the Libyans. We can show you the box, but not what’s inside. We don’t dare… 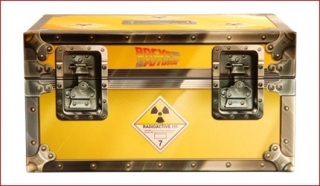