JAKKS Pacific who’ve been hard at work producing figures of your favorite MMA UFC fighters have just done one better by producing action figure of the TapouT crew consisting of Charles “Mask” Lewis, Jr., Dan “Punkass” Caldwell, and Tim “SkySkrape” Katz. The trio founded Tapout, the clothing company specializing in MMA branded clothing and gear that saw their gross earnings go from a modest $30,000 to a $200 million empire.

A month ago, JAKKS had teased at figures of the TapouT Crew, but they’ve since been revealed. Take a look and let us know what you think! 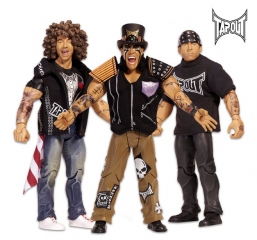