MINDStyle: To Infinity And Beyond Pixar Toys

MINDStyle has revealed that they will be producing a line of Art Toy Collectibles based on various Disney Pixar short films.

MINDstyle Toys is not only a huge friend of YBMW, but they are also one of the most impressive creators of vinyl collectibles the world over. If you’ve been following them on the site for the last several months, you’ve seen that they have now become the king of licensed vinyl with deals being announced with Disney and Warner Bros. Well, now they’ve got a new license within their Disney deal to announce and, this one has never been done before.

MINDstyle and Disney Consumer Products are proud to announce the limited edition line of Art Toy Collectible (ATC) figures for Pixar based on their classic animated short films. PIXAR’s unprecedented string of hit animated features was built on the short films in this collection.

While there’s been tons of product created for movies like Cars or Toy Story, never before has there ever been product for the short films that have been the backbone of PIXAR since it first launched.

The first figure shown is the Tin Toy, from the classic Pixar short film of the same name. More recently they teased that something like the birds from “For The Birds,” which won the 2002 Oscar for Best Short Animated Film may also be in the works. 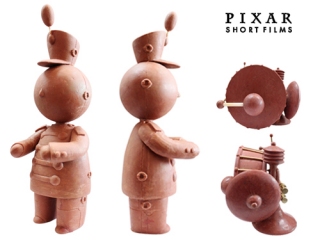