To celebrate this slab of videogameular awesomeness, NECA is proud to unveil our first Dante figure. 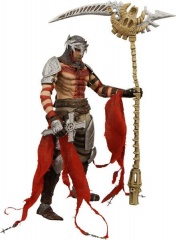 NECA has posted new images and news about their upcoming Dante figure from Electronic Arts upcoming game Dante’s Inferno. Here’s the press below:

In the upcoming EA third person adventure, Dante’s Inferno, you are Dante. Death has come to steal your love Beatrice’s soul and take her to Hell — but on his way out, you grab his scythe and follow behind. As in Dante Alighieri’s epic poem, The Divine Comedy, the poet Virgil guides Dante through the circles of Hell, encountering the embodiments of the seven deadly sins along the way. In the video game, he rides on the backs of demons and slashes his way through each circle on his way to Beatrice, who is being held by Lucifer himself.

To celebrate this slab of videogameular awesomeness, NECA is proud to unveil our first Dante figure. Boasting 30 points of articulation, Dante is truly one of a kind. He carries a Cross in a sheath on his right hip, has an interchangeable right hand, and then, of course, there’s the scythe…

An imposing site in itself, Death’s scythe stands over eight inches tall! Not only that, but the blade is detachable for hand-held use. It might just be the coolest videogame weapon ever, and it’s definitely given its due with the Dante figure. The Inferno will never be the same.

Dante’s Inferno will be released February 9, 2010 on PS3, Xbox 360 and PSP. Our Dante figure hits stores after Xmas and will also be available at our Amazon storefront.