This new line features 3.75″ articulated action figures based on fan-favorite characters from the show such as Merlin, Arthur, Gaius, and Morgana. 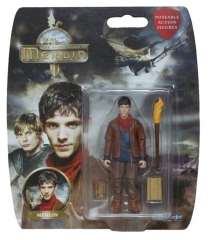 If you had asked me last week whether there’d ever be a series of “Merlin” collectible figures, I’d probably say no…

Based on the live-action television series “The Adventures of Merlin,” otherwise known as “Merlin” in the United States comes new action figures license by Fremantle Media. This new line features 3.75″ articulated action figures based on fan-favorite characters from the show such as Merlin, Arthur, Gaius, and Morgana. There are four figures in the series and each figure will come with a variety of accessories.

These figures are about to hit the UK, and you can get them at scificollector.co.uk for £7.99 preorder price (valid until 1st September, thereafter £8.99), and will be available from specialist stores in the USA by late Fall. Ask your local store to get in touch with Davis Marketing or Diamond Comics.

“Merlin” which airs here in the US on the Syfy network takes an imaginative new twist on a timeless legend, Merlin is set in the mythical city of Camelot, before history began. It’s a fantastical realm of legendary beasts and mysterious peoples, and a dangerous world where magic has been banned by the ruthless tyrant, Uther Pendragon.