Camilla d’Errico and Dark Horse are teaming up to create an amazing recreation of her painting “No Ordinary Love.”

Camilla D’Errico, one of my favorite current artists made her first venture into the world of toys last year when she released a vinyl version of 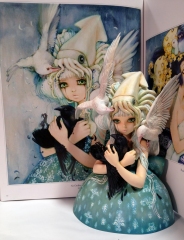 One of the brightest stars of pop-surrealism, Camilla d’Errico is known as an artist, designer and graphic storyteller. Now, she is set to debut perhaps her most collectible item yet, as Dark Horse is very proud to bring forward her first deluxe sculptural piece, an intensely-detailed bust based upon her painting “No Ordinary Love”.

“’No Ordinary Love’ is a piece that is very dear to me,” Camilla d’Errico reflected, “ its the visual interpretation and expression of my feelings for my ‘one and only’, so you can imagine how exciting this is that this particular piece was chosen!”

Slated for a late June release, the meticulously-painted sculpture measures approximately 8” tall and 5” in width, making it a diminutive but exquisite jewel of a statuette, packaged in full-color collector box with a Certificate of Authenticity.

The beautiful sculpture is set to make its public debut at the Jacob K. Javits Convention Center in New York City for Toy Fair 2012. Upon release, this piece will be strictly limited to only 950 numbered copies for worldwide distribution, and is sure to sell out.

“Translating Camilla’s work into three-dimensions was a challenge,” Dark Horse’s David Scroggy observed, “but with a lot of help from Camilla and the skilled artisans at Gentle Giant Studios, we were able to arrive at a piece that is unmistakably d’Errico, with all the subtle nuance and details of sculpture and paint application that her audience would expect.”

Camilla d’Errico supervised every aspect of the sculpting and paint application as the piece took shape, providing additional reference, commentary and color notes throughout the prototyping process.

The painting “No Ordinary Love” was included in the Dark Horse published art book of d’Errico’s work, Femina and Fauna, which has gone into multiple printings, being found in a diverse array of retail venues around the world.

Camilla d’Errico is an urban contemporary painter, illustrator, character creator and comic artist residing in Vancouver, BC. With roots in comics and manga stylings, Camilla’s beautiful work is seen on toys, clothes, accessories and more. She has been published by Random House and Tokyopop (Avril Lavigne’s Make 5 Wishes), Simon & Schuster (Camilla d’Errico’s BURN), Image Comics (Sky Pirates of Neo Terra, Fractured Fables), IDW (Swallow 5, Sparrow 13) and Dark Horse (Vampy Cat, Femina & Fauna). In addition to several other projects, Camilla is set to publish her critically-acclaimed series Tanpopo with BOOM! Studios later this year thanks to the help of a wildly successful Kickstarter campaign, and is continuing to work with Joshua Dysart (The Unknown Solider, B.P.R.D.) on an original graphic novel titled Helmetgirls: Origins.