Toy Fair 2012: Mattel – Back to the Future II Hover Board

Revealed at Toy Fair 2012, the “Back to the Future II” Hoverboard 1:1 prop replica… does not actually hover.

Revealed at Toy Fair 2012, the movie accurate “Back to the Future II” Hover board 1:1 prop replica! Naturally the hover board does not hover or float on water. Pre-orders will begin March 1 through March 20th.

Here’s the official press release:
Finally! This totally awesome 1:1 replica of the hover board from the BTTF 2 and BTTF 3 films includes multiple whooshing sounds and will glide over most surfaces (does not actually “hover” – check back in 2015 for that feature). We’ll be taking orders for it March 1 – March 20, 2012, and the final product will be shipped around November/December 2012. Because this is such a high-cost item, there will be a minimum number of orders required to go into production. If we don’t receive the minimum orders, won’t go into production and customers will not be charged. The price will be announced later this month. (Note: Hover board does not work on water.) 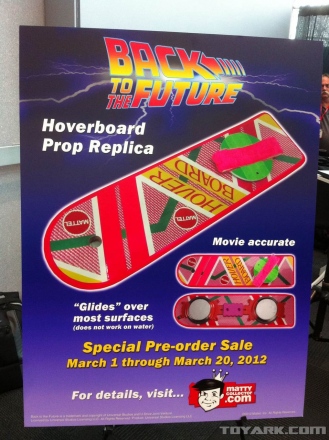