What Avengers: Endgame Spoilers Does The Thanos Build-A-Bear Know?!?

Spoiler Warning, because everything at this point is a spoiler.

By the time we finish the opening weekend of Avengers: Endgame, it’s possible that we could be looking at the first film to hit a billion dollars at the box office in the first week of release. That means that millions of movie-goers are also going to be hungry for merch. Don’t worry, Marvel and Disney are going to make sure you can get pretty much anything Endgame, and that includes Build-A-Bears. In particular, a talking Thanos Build-A-Bear.

So, what’s the big deal about a talking Thanos teddy bear toy? It’s not that he talks, but what he says! According to reports, the Thanos bear has five phrases that he speaks that come from all over his MCU films (unless this is just further spoiling time travel!?!?). The phrases we’ve already heard from the lips of the mad Titan include: “I don’t care for your petty politics,” and “If you cannot retrieve the orb don’t bother coming back.” The real news comes in the form of the three phrases that are definitely from Avengers: Endgame:

“I had all the power in my grasp,”
“How are you doing this? You do not have the will to wield the power of the Infinity Stones!”

That leaves one phrase left unknown. What is it? We have no idea, maybe it’s “Damn, Ant-Man, get out of my ass!” 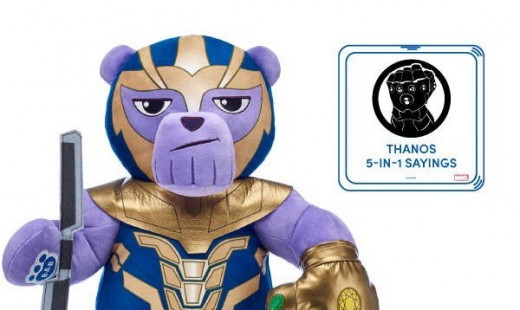