If the style of her humor sounds a bit familiar but you can’t quite place it, Roman Dirge, Lenore’s creator also collaborated on several episodes of Invader Zim. 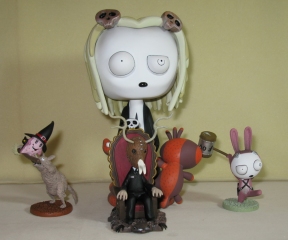 I’m a big Lenore fan. She is the cutest little dead girl ever. Her comic and online web cartoons turned her into a an instant cult sensation for anyone with a slightly twisted sense of humor. If the style of her humor sounds a bit familiar but you can’t quite place it, Roman Dirge, Lenore’s creator also collaborated on several episodes of Invader Zim.

Vinyl Figure: There’s not too much to say about the vinyl figure. It is what it is… and that is cute. Dark Horse did a great job of capturing her likeness. the colors are perfect, like they’ve been lifted right off the page. What makes this one a little bit cooler than just a plain figure is that it re-creates a scene from the comic where her best friend, a vampire turned, stuffed animal is swallowed by a snake. They did a great job of doing the snake and making it look like the little guy was right inside him.

PVC Set: This is the second PVC set from Lenore. While I liked the first one, this one is even better. The figures are all very well done and have a surprising amount of detail considering their size and material. Included in the set are: Taxidermy, sitting in his chair and looking just as creepy as ever. The Spam Witch , and Lenore, from one of my favorite comics ever where she did her take on the old story of Little Bunny Foo Foo. This is a great little set.