For many, Gran Torino will certainly not be one of Clint Eastwoods’ best films, nor will it be one of his most memorable performances. But as a movie and a drama, it is beautiful and poignant, solemn yet optimistic.

For many, Gran Torino will certainly not be one of Clint Eastwoods’ best films, nor will it be one of his most memorable performances. But as a movie and a drama, it is beautiful and poignant, solemn yet optimistic. While most reviews weave in a brief synopsis, I’ll be skipping that today because the official Gran Torino website does a fantastic job covering all the basics. What I will talk about is what worked, what didn’t and why Gran Torino has the best chance to “kill” a certain “Bat man” buzz and win big at this academy awards this year. 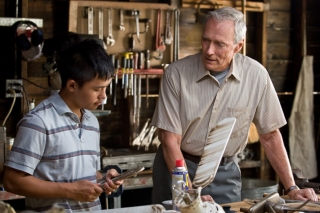 One of the main issues that plagued Gran Torino was its over reliance on a supporting cast comprised of unknowns and never-heard-ofs. Although occasionally this would not be a problem, it does when their acting chops come into question. I won’t name any names like Bee Vang (Thao) or Ahney Her (Sue), but there were various moments when lines were spewed out, like… well, lines. It was as if lines barely clung to the tip of their tongue and had to be excreted all in one breathe, otherwise they would have been forgotten and a scene ruined. My criticisms of Bee and Ahney may seem harsh, but earnestly I do admit, that not surprisingly however, I cannot think of any better or finer actors to tackle their role. Because while they lack line delivery and perhaps dictation, which comes from experience, they made up for it two-folds with their character persona and believability. And for that, I must commend them both.

Other issues I had with Gran Torino is its overarching preachy religious theme which eventually transcends dialogue and into visual representation. While this did not bother me as much, what did was the film’s overall premise which teetered on the perspective of the “white man’s burden.” A metaphorical term describing a condescending view of non-Western national culture or tradition, proposing how the Western culture is the principal model for which all ethnic and cultural backgrounds must ascribe to in order to be perceived as civilized. Much of this is sprinkled throughout the film, with Eastwood’s character (Walt Kowalski) trying to assimilate the young and misguided Thao and his interaction with his family who lives next door. Sure, most will probably argue that the religious theme is more prominent or that I am misinterpreting religious motifs with cultural imperialism, but let us not forget that throughout history they actually went hand in hand.

This brings up my final criticism of Gran Torino, Walt (Eastwood) and his perpetual use of ethnic and racial slurs. Throughout the film it is obvious that Walt is not a racist by conventional means. As a result however, his racial slurs almost become a form of endearment when referring to Thao and members of the Lor family. To me this is troubling because it glorifies the use of racial slurs and reduces them to merely words. Those who believe that they are just words fail to comprehend the history of violence, discrimination, prejudice, intolerance and genocide associated with these words. Words are never just words. Not especially when they have the ability to create, institutionalize and mandate discriminatory laws and practices– because the pen is mightier than the sword, and those who cannot remember the past are condemned to repeat it, blah, blah, blah. Ironically enough, one of the funniest scenes in the movie is the part where Walt encourages Thao to “talk like a man” with confidence and racial slurs. It would also be wrong of me to not say that what I have said above is in a way briefly, almost as a footnote, pointed out in this very scene. 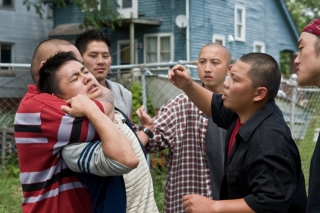 By now, you must be wondering what possible good can come from such a movie which I have so heavily criticized. Well for starters, a lot really. With much of it rooted in its neo-realistic portrayal of the community in which Walt and the Hmong community inhabit. It is what it is, a community comprised of refugees who have fled from their homelands in order to seek salvation in the impoverish wasteland of abandoned America, decorated by broken shingles, crabgrass and urban violence. Gran Torino is not a movie about a car or how much Walt can growl and curse at people. It’s a movie about survival and making the best out of what little opportunity one has. It’s about the choices people make in life in order to see and live another day. Success is measured not by wealth or materialism, but by doing what’s moral and what’s just — whatever it may be, whether helping a neighbor carry in some groceries, respecting your elders or just simply not succumbing to temptations and peer pressure.

Credit must also be given to screenwriters Nick Schenk and Dave Johannson for penning a script about an ethnic minority that may not be familiar or well-known to most. Sure they could have coped out and gone with more familiar ethnic groups but instead they decided to shed light on the colorblindness of poverty. The fabrication and myth of Asians as a model or invisible minority is shattered in this film and perhaps for the first time ever, we get the chance to see poverty as it truly is. That it is not just predominately a Black, Hispanic or White issue regardless of how much society wants us to believe.

Furthermore, the casting works much to the film’s credit as it also provides opportunities for Walt to engage in culture shock which much of the film’s humor is built around. Cultural ignorance/bigotry also a plays a role, particular between his banters with Sue who would joking retort that Hmongs “don’t eat dogs, only cats,” every time Walt tells her not to touch his dog, Daisy. Gran Torino also does an adequate job introducing the Hmong culture to the world without it becoming a PBS “Learn about Hmongs” special. While I am no expert on the Hmong culture, from what little I know their portrayal is authentic, particularly between the two different generations.

Not everyone speaks English in this film and as it should. A mix of Hmong and English was often used between the different generations as a method of communication. This was realistic and something that is common among many immigrant households with various generations. Because while Thao’s mother does not speak English, both Thao and Sue speak perfect English in addition to some Hmong as a result of growing up in a dualistic environment. A scene depicting such duality and perhaps the most endearing is that of a little girl who speaks to Walt on behalf of her grandfather and then translates Walt’s respond back to her grandfather in Hmong. 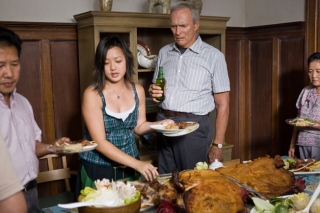 Although cultural differences were initially highlighted as a way to ease Walt and the audience into this new found community, the film begins to shift away from the differences and into the similarities. At one point, a disgusted Walt even says to himself, “I have more in common with these **** than my own spoiled rotted family.” We begin to see a weathered and spiteful old man open up to not just his new friends but even his estranged son. This change becomes instrumental to Walt’s development as well as the direction of the movie which shifts dramatically as a result. Walt and the Lors become in a way, like family, and Thao finds himself a father figure to offer guidance and support, despite the fact that he had previously tried to steal Walt’s car. The closeness Walt develops for the Lors is perhaps most evident when tragedy strikes and he becomes just as worried, frustrated, hopeless and angry.

So let me ask you, what makes a movie worthy of academic consideration? I will admit I went into Gran Torino expecting to see a bad ass Eastwood, kicking ass and taking names. But after its viewing and remembering Million Dollar Baby, I begin to realize the type of movies Eastwood often involves himself in. They are movies that are mature and genuine, with characters that are humble, hardworking, honest, blue collar and essentially what Eastwood believes best represent the purest essence of “America.” Gran Torino is one of these types of films, an authentic drama carefully crafted and worthy of evoking some of our deepest emotions, meanwhile offering us a glimmer of hope for the possibility of dreams and a better tomorrow. And in the economic state that we are currently in, isn’t it about time that we too start to believe?