As always, Hot Toys does an amazing job. 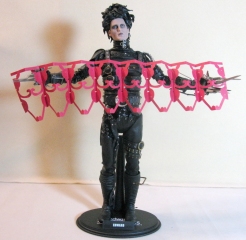 I still remember seeing Edward Scissorhands in the theater. The movie was amazing and it is probably to this day one of my favorite Johnny Depp Performances. Tim Burton crated a parallel universe where we could believe in Vincent Price’s inventing ability existing just up the hill from a town that was permanently stuck in 1955. It was Beauty and the Beast with a tragic Romeo and Juliet ending. Edward is probably one of the most visually unique human characters to be in the movies in the last 50 years. It only makes sense that Hot Toys would make an equally amazing figure to commemorate him.

Let’s start by talking about the package. As always, Hot Toys does a tremendous job. The art on the box is amazing and the quality of the window box is up there with companies like MINDstyle. What really took me by surprise was the little packaging Easter Egg. Just pull down the front of the box and you are treated to a replica of the die-cut 3D movie theater stand up from the picture’s original release. Just be careful, this part of the box can be a bit fragile.

Moving on to the actual figure, what can I say? As always, Hot Toys does an amazing job. It is probably best to start at the top and work our way down. To be honest, the hair is my least favorite part of the of the figure. It is just a little too wild for me. I know, it was pretty wild in the movie, it just doesn’t look quite right. However, when you move down to the face, all is forgiven. That face is amazing. I don’t know if they do laser scanning or just hand sculpting, but they nail almost every likeness they attempt and this is the same. This looks just like Edward Scissor hands. The pale shares, the tortured eyes, the multiple scars all over his face, damn.

From the neck down, there are really only two things to talk about, the outfit and the hands. Starting with the outfit, there is nothing to complain about here. So many buckles! Its like a surrealistic tortured bondage fantasy. It looks just like it did in the movie and the detail is spot on and super-intricate.
Amazingly, the hands are even more intricate than I remember. In my mind, I remember the scissors being uniform. I didn’t even realize that they were cobbled together out of all different types of shears. What’s more, they open and close so you can pose them however you like. This does lead me to a bit of concern about the figure. The plastic wires that connect to the scissors look like they could break if you aren’t careful. So be careful cause if you break this figure, you didn’t deserve to have it.

My only complaint is the accessories and the only reason I complain is because Hot Toys has a habit of spoiling us with tons of great gear. With this figure, we get a paper doll. I get why it’s in there and it is a cool thing to get, a delicate, cool, fragile thing… but I’d like to have seen a bit more. Maybe a topiary or a hair styled poodle… maybe even the hands that he’ll never be able to use.
All in all, this figure is pretty damned awesome.