Despite being one of the more lackluster figures in Series 1, ShadowHawk is a solid figure. 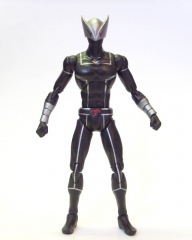 After three years since their initial announcement and various growing pains, Shocker Toys’ long awaited Indie Spotlight Series 1 is finally here. Series 1 consists of five collectible action figures from popular indie comics such as David Mack’s Kabuki, Terry Moore’s Katchoo from Strangers in Paradise, Rob Schrab’s Scud: The Disposable Assassin, Sam Kieth’s The Maxx and Jim Valentino’s ShadowHawk. Each figure comes with either a white/black Isz or Pink Fairy (Maxx comes with all three) in addition to character specific accessories and/or exchangeable parts. Up for review today is the ShadowHawk variant that is also available in Series 1. It is one of two with the other being a Scud variant, the SOLARIS series SN-1169.

I can’t honestly say I know much about Image and Valentino’s ShadowHawk having only read a handful of the comics. But he is without a doubt one of Image’s most recognizable characters next to McFarlane’s Spawn and Larsen’s Savage Dragon, all of whom were created during the superhero-steroid–angst era of the 90s. This variant ShadowHawk figure would be the fourth figure made of Valentino’s creation, with the first two being made by McFarlane Toys a few years back and the third being the regular Indie Spotlight ShadowHawk figure.

Although the Indie Spotlight figures probably won’t be available at most mass retail outlets, it’s produced with mass market in mind. The package design is your typical bubble/card style and makes good use of space. On the front there is a personalized image of the character and on the cardback the same image is shown in addition to the character’s origins story. What I liked especially about the packaging is the fact that it is collector friendly, meaning it was designed with both MOC (mint on card) collectors and openers in mind. Instead of gluing the bubble to the card, the two are attached with tabs and the cardback slides out from the top. This makes the packaging resealable so you can take the figure in and out of its plastic/cardboard prison.

ShadowHawk stands a little over 6” tall and is in good scale with most 6” figures. In terms of bulk however, he is a bit undersized and similar to the first Daredevil figure from the Spider-Man Classics Series 2 line. But while Daredevil was awkward and gangly, ShadowHawk looks better and seems to have more realistic proportions. I’m not sure if this was done intentionally, but as a result, he also does appear skinner than the original comic book source material. While this doesn’t bother me, it may bother some who expect him to be built more like a linebacker than a wide receiver. 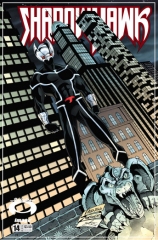 Since this variant is based off the ShadowHawk II design, the figure is pretty basic with little to no additional sculpting over the black base body. The overall anatomical sculpting is not the best that I’ve seen. There’s definitely some oddness with the way the pectoral muscles are sculpted – almost reminiscent of the infamous Rob Liefeld Captain America — and the muscles in the arms are not very defined. His feet are also a bit strange. The toes are curved at the tip and the bottoms of the soles are not entirely flat. This doesn’t affect any balancing issues however, as ShadowHawk stands fine by himself and even comes with peg holes if you want to pose him using a figure stand. The variant comes with a different head than the regular, and while it looks different than the art I found online (which looks more like the regular figure), I think I have seeing this version somewhere before.

ShadowHawk comes with a nicely sculpted claw accessory that snaps on easily to the wrist. The white Isz that came with ShadowHawk is a nice bonus. It is sculpted nicely and appears more playful and better proportioned than the crazy homicidal Isz by McFarlane which may be more cartoon accurate.

Because ShadowHawk is wearing basically a black designer wetsuit, he is molded entirely in black with very little paint applied to him. The silver that’s part of the design is applied well throughout the body. The red for the belt and eyes are sharp and clean. The only slop that I noticed was at the base of the helmet where some of the silver bleeds onto the black. There doesn’t seem to be any wash on the figure, a little blue wash probably wouldn’t have hurt. The Isz appears to be painted entirely in white and the paint around the mouth and the teeth are all spot on.

ShadowHawk features a nice blend of both aesthetics and articulation, something that Shocker Toys have been trying to perfect since the series was first announced. I counted around 23+ points of articulation, with a majority of them being ball joints and some hinges. The design of the shoulders and hips are definitely unique and different than typical articulations we’re accustom to seeing. They’re hard to describe but they do resemble true ball-and-socket joints and function similarly and realistically to how we articulate and move.

Surprisingly, the shoulders move really well and have a wide range of movement. The same articulation also doubles as a cut bicep and makes the figure look more natural and aesthetically pleasing when posing. The chest and waist are similar to the 25th Anniversary G.I Joes but offer better range and can swivel in all directions and actually hold the position without any problems. The hips are similar to the shoulders, although they don’t work quiet as well because you can’t swing the legs fully forward. Other than that they can achieve most poses. The ankles and wrists are both ball jointed. And while it’s fine for the wrists, it doesn’t work quiet as well for the ankles because it limits the backward movement and doesn’t really do much for the movement from side to side.

ShadowHawk feels solid and is a good figure overall. The plastic is not rubbery and all the joints are tight with no stuck paint. It has great articulation, decent sculpts and is a fun figure despite the simplicity of the character design and being one of the more lackluster figures in Series 1. Credit must be given to Shocker Toys for sticking with this line for as long as they have and for finally coming through with quality figure representations of some of our most beloved indie comic book characters.