At the heart, this is both a love story and a fight for survival and domination of your species. That means it’s gonna get violent. Violence means action. Action means me gusta. 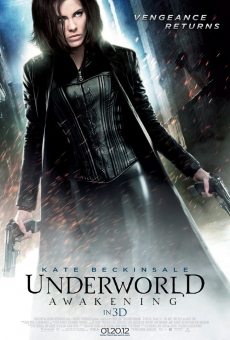 Date night for Clyde and I means going to a good theater, getting a good hot dog (mango and jalapeno with watermelon BBQ sauce) and a giant tub of caramel corn (for me). I got to choose the movie. Without hesitation, I announced I wanted to watch “Underworld Awakening”.

I love the “Underworld” franchise. I think it’s well done and plays on the eternal war between the weres and the vamps. I also like how the franchise has explored the question of “what would happen if the two should combine”.

While I enjoyed “Underworld : The Rise Of The Lycans”, I have to admit that it wasn’t as good because of Kate Beckinsdale’s absence. Yes, okay, fine….so it’s an origin story and Kate’s character wasn’t born yet. Whatever.

Imagine my glee when I learned Kate would reprise her role as Selene. Thank the powers that be for the return of Kate Beckinsdale. I have a total crush on her.

In case you’ve also been hiding yourself away and do not have any idea of what this movie’s about, here’s a snippet from Wikipedia :

Six months after the events of Underworld: Evolution, vampire Selene is captured by humans during “The Purge”, a massive crusade of extermination of vampires and lycans after mankind learned of their existence.

On to the good stuff!

I’m not a big fan of 3D in movies like “The Notebook” or any Meryl Streep movie. This isn’t to say they aren’t good movies because they are. It’s just that paying the additional $$$ for 3D in movies such as these aren’t worth it to me because the story carries you along just fine. Having things appear 3D in these movies don’t add anything to the experience.

However, “Underworld” movies are packed with action. Kate’s flinging awesome, UFO shaped bombs around. Blood and bits and gore are splattering as she crunches Lycan skulls and delivers some Matrix-ish ass kickery. Lycans are exploding out of tunnels every which way you turn and they’re all running at you! Lycans are exploding! Windows are exploding! Exploding!!

You get the idea.

At the heart, this is both a love story and a fight for survival and domination of your species. That means it’s gonna get violent. Violence means action.

In movies like this in which action DOES play a significant part in the storytelling itself, I say 3D enhances the experience. 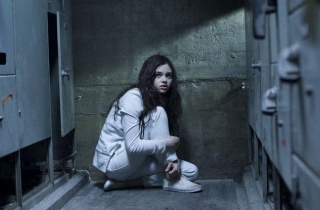 The Heart Of The Matter

There were a bunch of twists in this story that I did not see coming. That’s pretty good because while I’m no Encyclopedia Brown, I’d like to think that I can spot obvious plots twists.

The twists in this story are pretty subtle minus the part where you figure out the little girl, Eve, is Selene’s daughter….but you figure that out once you realize that it’s not Michael’s eyes Selene is looking out of. Wait, they now can see through each other’s eyes? Talking about looking through the eyes of love. Yes, I’m referencing an 80’s song and I realize I may have just dated myself.

Did that sentence about seeing things through another’s eyes even make sense? That’s what I mean about plot twists! This latest installment just keeps them coming when you least expect it.

What I really enjoyed about this story is how it’s both complex and simple at the same time.

Humans are the bad guys….or are they? Michael is dead….or is he really? Lycans have been eradicated to the point of extinction…or is that REALLY true?

The timeline of “Awakening” feels like it only takes place over a few days and yet you feel like a lifetime’s worth of changes occurred.

Kate, I Love You

My husband has a crush on Kate. That’s okay because I have a bigger crush on her. I’m about to erupt into total fangirl mode.

She’s beautiful. She takes the act of butt kicking to places of savage beauty. That accent!! It’s just delicious to hear her talk in character as Selene. I can’t think of anyone else who looks that good in Selene’s costume. Holy ****.

There’s this one part where she falls out of the cryogenic tank and is naked on the floor. As I’m watching that scene, all I could think about was “Hawt damn. She had kids too. Wow, there’s hope for me should I ever have kids!”

Kate, you are my inspiration. You and all the Victoria’s Secret Angels who have kids.

This is the conversation Clyde and I had when we walked out of the theater:

Clyde : I know what your favorite parts are in the movie.
Me : Oh yeah? What do you think they were?
Clyde : The part where she’s naked on the floor and the part where she
puts on that long coat in slow-mo.
Me : OH MY GOD!! HOW DID YOU KNOW?!
Clyde : Duh. I married you. Of course I know! I was also thinking
to myself “Hm…Bonnie totally wants her clothes and shoes.”
Me : OH MY GOD!! YOU SO READ MY MIND!!!

It’s true. When Selene was able to move, I noticed with great pleasure that the first she reached for was her pair of boots. Good girl. 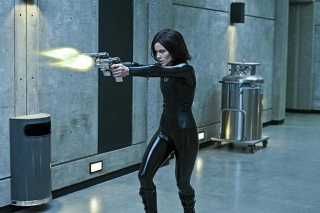 1. For all the people who said the plot made their heads hurt, is it because thinking makes it hurt? I don’t know about you but I don’t always want my movies fed to me in small, managable bite sized pieces. I like the twists and the turns as the walls are splattered with blood and gore.

2. This is, hands down, the bloodiest “Underworld” ever. Wow.

3. India Eisley as Eve is friggin AMAZING!!! When she mighty morphs into the hybrid, she is like something out of a Japanese horror movie. I would freak the fugg out if I saw her waiting for me in my
closet….and then I would pass out. She did an AMAZING job in this role.

4. Did no one else question the reason why the evil doctor captured Eve? Maybe it’s the nurse in me that zeroed in on when he was talking about how her menses are now normal and how the estrogen levels have stabilized or something to that extent. Call me crazy but I wasn’t so sure that the only thing they wanted was her genetic code. I thought the Evil Doctor was going to mate her to Quint! I was like “NOOOO!!! YOU CAN’T DO THAT!!! SHE’S JUST A LITTLE GIRL!!!! ….who can rip Lycans in half with her bare hands but still….she’s just a little girl!!!”

5. India Eisley looks like a young Adriana Lima to me.

6. Very rarely do I say that I wish a movie was longer than it really is. This is one of those movies. I can’t wait for the next installment.