Gadoury has named the city, K’aak Chi, which means “Mouth of Fire.”

We’ve known that the Mayans use the position of the stars for a lot of their planning, calendars, and even building placement for years. So, it’s pretty amazing that it took a Canadian teenager to put that knowledge to work and find a lost Mayan City, just by matching up star charts to the locations of temples on earth.

The teen, William Gadoury, has been interested in archaeology since the big hubub about the end of the Mayan calendar a few years back. His interest led him to spend hours comparing diagrams of constellations and maps of known Maya cities. That’s when he realized that there were correlations between the brightest constellations and the two largest Mayan cities. Amazingly, this is something that archaeologists had never done before.

So, after he compared 22 different constellations, and found that the corresponded to 117 Mayan cities located in Mexico, Guatemala, Honduras, and El Salvador, he found that his 23rd constellation had two matching stars, but one star with no corresponding city. With that knowledge, he was able to pinpoint the location of the city that matched the third star, deep in the jungles of the Yucatan Peninsula in Mexico.

“I did not understand why the Maya built their cities away from rivers, on marginal lands, and in the mountains,” explained Gadoury in Le Journal de Montreal. “They must have had another reason, and as they worshiped the stars, the idea came to me to verify my hypothesis. I was really surprised and excited when I realized that the most brilliant stars of the constellations matched the largest Maya cities.”

So far, they’ve only been able to identify that there are structures at the location, according to satellite imagery. They have yet to send anyone to the location to see if there are indeed the ruins of a city under the weeds. In the meantime, Gadoury has named the city, K’aak Chi, which means “Mouth of Fire.” 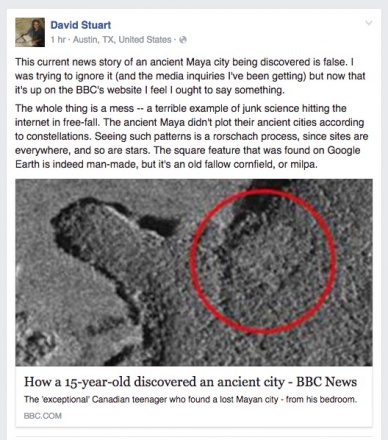