Caution, while this video is funny, it also has a lot of spoilers if you are just starting to watch the TV series.

Caution, while this video is funny, it also has a lot of spoilers if you are just starting to watch the TV series.

Youtube group, Notliterally, usually keep their online efforts relegated to the world of Harry Potter with their Ask Hogwarts series, but we are happy that they are spreading their wings a bit with this new video.

They’ve taken one of last year’s most parodied songs, Gotye’s Somebody That I used to Know and they’ve turned it into a lament about the rampant character death in the HBO series, Game of Thrones.

Lyrics:
LYRICS
Now and then I think back to 2011
Back in season one when all the characters were alive.
Told myself that it was just TV
But didn’t know it meant so much to me.
And though it’s fiction, it’s an ache I still remember.

You can get addicted to a certain HBO show.
Chock full of violence and boobs…so many boobs.
(When) characters started dying off like flies,
(And then) That’s when I was forced to realize
That this show would ruin my whole life forever.

But you didn’t have to kill them off
George R.R. Martin, why are you such a sadistic bastard?
I went through a whole tissue box,
And my friends who read the books say that there’s worse to come.

I thought the main character was Ned Stark, since he’s on the posters.
That had me believing that you wouldn’t dare to kill him, too.
But then you put my dreams in check
When you put a sword through Ned Stark’s neck
Wasn’t ready to let him go.
And I didn’t know he’d end up as a character I used to know.

And then you go after Khal Drogo?
Goddamnit, Martin, I was finally starting to ship them.
C’mon, he was her sun and stars!
He got a goddamn papercut, are you for real?

And then you brought him back to life?
Killing him once wasn’t enough for you? Think of the fangirls.
I should’ve been prepared by now
For him to be a character I used to know. 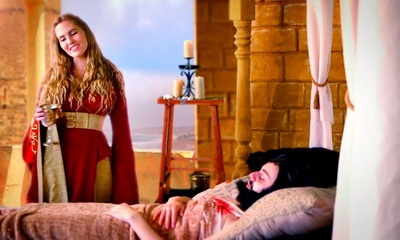