Well, at least we know that when the Terminators come on judgement day that they’ll all be singing catchy classic rock tunes…

Well, at least we know that when the Terminators come on judgement day that they’ll all be singing catchy classic rock tunes… We’ve posted plenty of robot band songs before, but this is the first one with actual humanoid robots who not only play instruments (cool ones like the Blue Man Group) but they even sing the words in a relatively human voice… not like the normal Stephen Hawking style that we usually see.

Here’s the official explanation:
produced by the Music & Entertainment Technology Laboratory (MET-lab). The HUBOs are operating autonomously (not human-controlled). Their movements are directed by student-developed software to perform the gestures necessary to produce the appropriate notes and beats as dictated by a musical score. Every sound in the video was performed by the robots.

MET-lab student Matthew Prockup created the musical arrangement for drum kit and three “Hubophones”, novel percussion instruments designed and constructed by the lab for this performance. 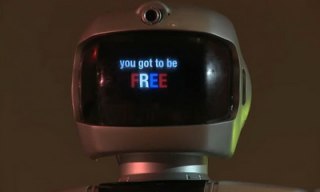