Australia’s Advertising Standards Bureau has ordered a new Calvin Klein billboard to be pulled after finding it to be suggestive of rape and violence. 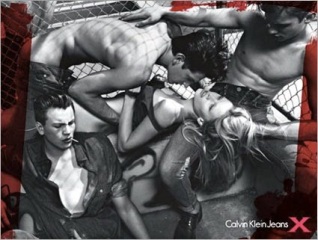 Calvin Klein’s latest racy campaign which has appeared on billboards in Sydney and Melbourne has sparked more than 50 complaints from sexual assault workers and women’s advocates.

As of today, Australia’s Advertising Standards Bureau has ordered a new Calvin Klein billboard to be pulled after finding it to be suggestive of rape and violence — although also acknowledging that the act “could be consensual.”

“The Board considered that whilst the act depicted could be consensual, the overall impact and most likely takeout is that the scene is suggestive of violence and rape,’’’ they said.

“The Board considered that the image was demeaning to women by suggesting that she is a plaything of these men. It also demeans men by implying sexualised violence against women.”

The billboard features model Lara Stone engaging with three men engaging in what appears to be a “highly sexualised and clearly suggestive of sexual behaviour.” While women’s advocates go as far as describing the ad had connotations of gang rape.

“If we continue to subject future generations of young men to great barrages of aggressive, misogynist, over-sexualised and violent imagery in pornography, movies, computer games and advertising, we will continue to see the rates of sexual violence against women and children that continue unabated today. Or worse,” she said.