On Sunday night, Washington DC Police picked Nick up and took him to the hospital as a precaution. There, he was reunited with his family.

Call it a New Year’s Miracle, or maybe just dumb luck, but one family is happy to have their missing son back home after a bored AP reporter took some photos of homeless men in Washington DC.

The man’s name is Nicholas Simmons, 20. He had disappeared from his parents’ home in upstate NY on New Year’s Day, leaving behind his wallet, cellphone and all other belongings.

By coincidence, on the 4th, a DC photographer with the Associated Press was looking for a way to illustrate the frigid weather in the city when she found a group of homeless men huddled around a grate. One of them, who was shivering under a blanket, told her his name was Nick. The next morning, the photo of Nick ran in USA Today’s Sunday edition.

People from a Facebook site that had been set up to help find Nick saw the photos and contacted USA Today, who then called local police. After that, USA Today, tweeted the reporter and let her know that Nick’s family was searching for him.

On Sunday night, Washington DC Police picked Nick up and took him to the hospital as a precaution. There, he was reunited with his family.

There’s been no reporting on what caused Nick to suddenly leave his life behind and end up on the streets, but he’s at least back home now and getting the help that he needs. 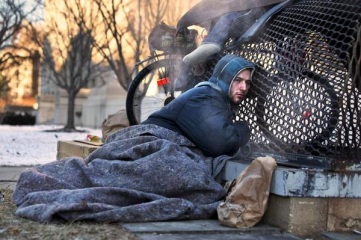 Nicholas A. Simmons, pictured here, was missing from his New York home for four days when an AP photographer met him and took his photo on an assignment to cover the cold weather. Here’s the original caption: “Nick warms himself on a steam grate with three other homeless men by the Federal Trade Commission, just blocks from the Capitol, during frigid temperatures in Washington, Saturday, Jan. 4, 2014. A winter storm that swept across the Midwest this week blew through the Northeast on Friday, leaving bone-chilling cold in its wake.” (Image source: AP/Jacquelyn Martin)