How To Raise Them Right: Geeky Star Wars Nursery Is Geeky

If I didn’t know any better I’d say this is exactly how I’d setup my nerdcave.

Rocky M. Olsen III may just be a little over 2 months old, but the young Padawan is already fully immersed in the Star Wars universe much in part due to his geeky parents and his fantastic Star Wars nursery.

Decked out with a Wampa throw rug, Rocky can gaze nerdily at his X-Wing and TIE Fighter mobile and play with his Star Wars plushies! All the while sleeping on a “New Hope” pillow.

If I didn’t know any better I’d say this is exactly how I’d setup my nerdcave.

It’s also been confirmed that his parents are going to show him Episodes 4, 5 and 6 first, just to make sure he’s raised right. 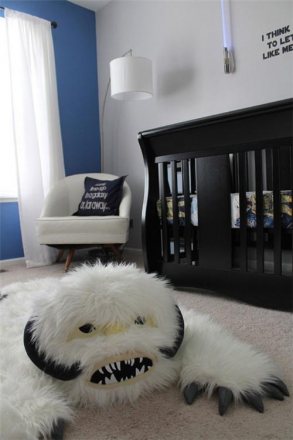