Rhett & Link – Get Off The Phone Song

It happens again and again. You are out with friends or on a date, or even trying to talk to your spouse and you find yourself having to compete with their cell phone or tablet. I remember going to Star Wars weekends this year and seeing more people holding up cell phones and iPads to record the stage show than people who were actually watching it. Now, Rhett & Link are out with a new song telling people to just chill out and get off the phone!

Lyrics:
Here we have a man
Who’s chosen to Instagram
His apple pie, a la mode.
While he fumbles through the filters
His ice cream has gotten “a la hot”
And the pie “a la cold.”

As you can see
This street performer’s drawn a crowd
To watch him do his thing.
But instead of just enjoying the show
it seems that everyone’s decided
To make a documentary.

Notice this unreasonably attractive couple
Enjoying a reasonably priced Italian dinner together.
Social networking instead of working
On getting to know each other better

How does that filtered picture taste
Since your dessert has gone to waste?

When do you think you ever will
Wanna watch this portrait juggling film?

You know you want to touch each other
Does that feel good?
He’s my brother.

Get off the phone now!
It’s gonna be okay
There’s no need to be afraid.
It doesn’t love you
Its gonna die one day.
The government is probably
Spying on you with it anyway.

Here we have a stereotypical teen
Forced to endure “Family Game Night.”
He’s stereotypically texting
And missing his mom
Demonstrate a carousel ride.

Little Ethan here
Is celebrating being the center of the universe
For one year.
But “The World’s Greatest Dad”
Is more worried about ‘Facebooking’ it
Than actually being here.

Let’s listen in and see if we can get some context.
“Please hurry! We’re at 382 Pine.”
He has the nerve to make a phone call
At such a pivotal moment in his friend’s life.

How could you be so disengaged?
While precious memories are being made?

Do you really think your friends need
Another baby picture in their feed?

Don’t be such a self- centered guy.
Now isn’t that better?
“I think he just died.” 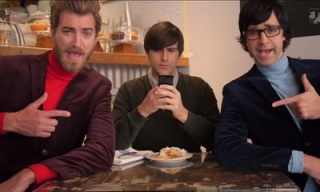