Actor/ Comedian Peter Serafinowicz gives us a taste of what it would sound like if the Daleks were to create a series of relaxation tapes. They will EXTERMINATE Your Stress!

Actor/ Comedian Peter Serafinowicz is one of those faces and voices that you will recognize a lot faster than you’ll recognize his name. His face is probably best known for his roles Pete in Shaun Of The Dead and Fa’ad on the FOX Comedy “Running Wilde”. A lot of people don’t realize that he’s also quite sought after for his voice. He was the voice of Darth Maul in Star Wars Episode I: The Phantom Menace and he’ll be playing the voice of Paul McCartney in the upcoming Yellow Submarine remake.

Anyways, he’s currently doing a short series of host posts on BBC radio for a show called Joyof6. In his most recent appearance, he did this awesome sketch for all the Doctor Who fans out there. to explain why we haven’t seen The Daleks on the show recently, he exposed what they have been doing to keep busy. Who would have ever expected that they were making relaxation tapes?

They will EXTERMINATE Your Stress! 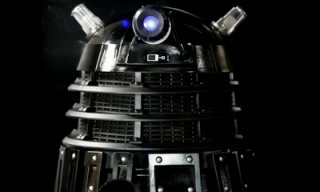