A unconventional Connecticut billboard with a life-sized mannequin and teddy bear on top is prompting emergency calls from alarmed motorists.

A unconventional Connecticut billboard with a life-sized mannequin and teddy bear on top is prompting emergency calls from alarmed motorists.

The mannequin and giant teddy bear on top of the billboard near exit 26 northbound on I-95, in Bridgeport, Conn., has many concerned drivers thinking the figure is real or that it may have been a suicide attempt.

Dispatchers at State Police Troop G barracks have been telling callers the man isn’t real and the figures have been up there a while.

The billboard is an advertisement for BMW of Bridgeport’s overnight test drive offer. The mannequin, who is wearing pajamas, was lifted to the top of the billboard with the teddy bear about two months ago.

The dealership’s general sales manager, Tim Coughlin, said there’s been very little negative feedback about the billboard, and they’ve gotten a lot of overnight test drives because of it. 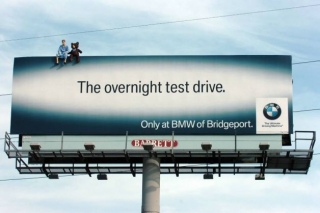