“Family Circus” comic strip creator Bil Keane, whose comics ran in newspapers for more than half a century passed away Tuesday at age 89 from congestive heart failure. 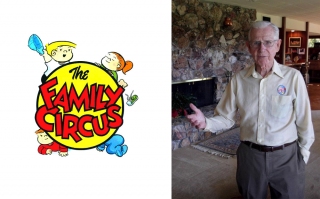 ”Family Circus” comic strip creator Bil Keane, whose comics ran in newspapers for more than half a century and entertained readers with simple sublime humor and traditional family values passed away Tuesday at age 89 from congestive heart failure.

Keane, who started drawing the one-panel cartoon featuring Billy, Jeffy, Dolly, P.J. and their parents in February 1960, died Tuesday at his longtime home in Paradise Valley, near Phoenix. His comic strip is featured in nearly 1,500 newspapers across the country.

Jeff Keane, Keane’s son who lives in Laguna Hills, Calif., said that all of Keane’s five children, nine grandchildren and great-granddaughter were able to visit him last week.

“He said, ‘I love you’ and that’s what I said to him, which is a great way to go out,” Jeff Keane said of the last conversation he had with his father. “The great thing is Dad loved the family so much, so the fact that we all saw him, I think that gave him great comfort and made his passing easy. Luckily he didn’t suffer through a lot of things.”

Jeff Keane has been drawing “Family Circus” in the last few years as his father enjoyed retirement.

Jeff Keane shared the sentiment, saying “Family Circus” had flourished through the decades because readers continue to relate to its values of family moments.

“It was a different type of comic, and I think that was my dad’s genius — creating something that people could really relate to and wasn’t necessarily meant to get a laugh,” he said. “It was more of a warm feeling or a lump in the throat.”