From The X-Files of A Miss Bonnified, Aliens ARE Among Us…

Aliens are among us, in fact, they may be us! There’s already a lot of speculation that aliens are the next step in human evolution and I’m going to agree. Why? Because. The End. 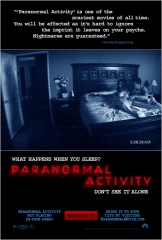 The X-Ecutioner’s version of the White Zombie song, “(Even) More Human Than Human” has a line that goes “There are things that go bump in the night / We are the ones who bump back.” Oh sh!!!!!!t… That’s what I’m currently listening to as I’m trying to hype myself up to do this horrible chore known as Laundry. So why am I feverishly writing away and neglecting the pile of clothes on my bed? Easy. I just remembered something.

A while back, YBMW talked about the new Milla Jovovich movie “The Fourth Kind.” I watched it, freaked out and tried to forget about it. To say that it’s disturbing is putting it mildly…and now, of course, I want to go see it because I’m special like that. I’m not sure if it was watching Animation Domination with my brother the other night or if it was hearing this song that triggered it but my thoughts started turning towards this movie again.

Grateful for anything that distracts me from my laundry (I swear they multiply like rabid rabbits when I’m asleep just to mess with me when I wake up and to keep Tide in business), I immediately decided to rewatch the clip. Now I’m thoroughly freaked out and here’s why:

There’s No Such Thing As Coincidence

N-O-M-E just happens to spell out O-M-E-N. That’s right. Omen. Don’t know what that means? Let me and my friends at dictionary.com break it down for you.

I’m not kidding about the “bird of ill omen” part. That’s what it says on the dictionary.com site. And what do you know…there’s mention of a bird in the movie but it’s not the classic bird of ill omen, a raven. In this case, it’s an owl. A super creepy owl….an owl that people in Omen, Alaska…I mean, Nome, Alaska are saying isn’t really an owl.

So if it’s not an owl, then what could it be?

It Sure As Hell Isn’t Superman, I Can Tell You That

If you watch the trailer closely, you’ll see that eyes of the owl elongate to eerily give it the appearance of an alien’s eyes. Now we’re gonna go into Bonnie’s Theory Of Evolution. I’ve been telling my friends this for years but they always looked at me weird so I took it as a sign to STFU because I was creeping them out…but now I see this movie trailer and I feel like I should share because sharing is caring.

There’s already a lot of speculation that aliens are the next step in human evolution and I’m going to agree.

Why? Because. The End.

Humans share a link with the Great Apes and then we split off to form our own jolly branch. We learned how to make and use tools in addition to these fantastic things known as “fire”, the “wheel” and microwaves. As a result, our bodies adapted and ta da! We are what we are today. This is the total cliff notes version because I don’t have all day to explain this. 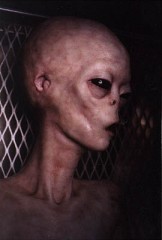 We went from the Ice Age to the Stone Age. Back in those days, the big and brawny ruled the earth. They clobbered the nerds and geeks with their muscles and might but then something funny happened. We hit the Information Age. Rippling biceps gave way to the super brain.

So what exactly is my point? It’s simply this. If humans keep evolving to suit the particular period we’re in, it makes sense that we’re still changing. Right? Therefore, it’s not exactly a huge leap of imagination to think aliens are us a few years down the line. I’ll go from head to toe.

Head : Sure, it’s a lot bigger than what we have now but that’s because we’re gonna need a much bigger noodle and noodle basket to house it in. We’ll be processing a lot more information at supersonic speeds so we’re gonna need the hardware and wet wiring to keep up. Besides, in case you haven’t watched the news or movies like “The Matrix” or “Johnny Mneumonic”, we’re now sticking stuff in our brains and hearts to keep us ticking and alive…and to also teach us kung-fu in 0.8 seconds flat.

Eyes : Remember when Little Red Riding Hood asks “Grandma” why she’s got such big eyes? I have the answer and the Big Bad Wolf was almost on the right track when he replied with “All the better to see you with, my dear.” It’s to intake all the information streaming by so that our now gigantimous brains can process them. I have absolutely no idea exactly what the range our current standard set of eyeballs can see but I’m guessing that if the eyes were bigger with the upgraded rods and cones and pupils to match, then the larger surface area would somehow translate to a greater ability to intake more stimulus.