I must be some kind of Super Bowl idiot savant or something. Last year, I called the win for the New Orleans Saints. This year, I was Packers all the way. Did I mention that I know jack s#!t about football?

I must be some kind of Super Bowl idiot savant or something. Last year, I called the win for the New Orleans Saints. This year, I was Packers all the way. Did I mention that I know jack s#!t about football?

Here’s how I pick my teams :

Yes, the Steelers have the Terrible Towel. That’s great because it’s perfect for wiping away the terrible tears I’m sure they’re all shedding after the Packers intercepted the ball so many times. Come to think of it, their accessory is perfect in terms of functionality.

But who the hell wants to be functional when you can WEAR CHEESE WEDGES ON YOUR HEAD??!! That’s right. I’d much rather wear plastic cheese and look like a freak than swing a bright yellow towel around like a freak.

Remember that song by Gillette? Omg…funniest song e-v-a-r. But back to football. When they were doing their “Meet The Team” piece during the pre-game, I couldn’t help but fall in football love with Rogers and all the wide receivers. They did a little dance and their nicknames were hilarious!! Quickie? Hick From The Sticks? Oh, come on. How could you NOT like that?!

The Steelers intro? I thought it sucked. I thought they came off kind of douchey and I didn’t find anything to like.

I am a sucker for the Underdogs. End of story.

I don’t think I’ve sat through an entire football game sober since I was in marching band in high school.

That was also the last time I was ever so into a game. I was screaming at the TV saying things like “OH, COME ON!!!! THAT’S EXCESSIVE CELEBRATION ON THE STEELERS!!! FOUL!!!” and a bunch of other stuff I don’t remember. I do, however, remember calling that the Packers were gonna turn it around in the 4th quarter. And guess what? They did!

I think I know why too. It’s because I was eating the magic bag of Spicy Nacho Cheese Dorritos.

I first opened the bag midway through the 1st quarter. That was when the Packers started their 2 touchdown winning streak and closed it down.

2nd quarter saw me put the chips down and the Steelers started to score. I immediately figured out what had happened and started back in on the chips so the 2nd quarter wasn’t a complete loss. 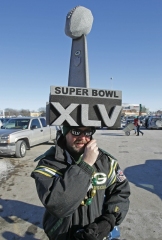 I put the chips down again and the Packers didn’t score AT ALL 3rd quarter. Their lead was getting shaved down to only a few points.

My anxiety set in and resolutely ate my way through 3/4 of the family sized bag. Because of my dedication, the Packers won and I gave myself an epic stomache…but it was worth it. They won the Super Bowl! I now know the secret for next year.

I have to admit to being disappointed in the commercials this year. The only ones I really liked were Mini Darth Vader / VW and the Audi commercial when the two old guys tried to escape from a posh prison. “Hit them with the Kenny G.”

I also don’t know why people were hating on the halftime show. How can people hate a show in which SLASH played “Sweet Child O’ Mine”??!! Dude, anything is better than The Who from last year. I had no idea who they were but I got really excited when they played the intro song for CSI. That’s sad. By the way, did no one else think the Black Eyed Peas were dressed in Raider nation attire? I thought it was pretty awesome.

As for Christina messing up on the national anthem…. * shakes head *

Bonnie N. Clyde is a writer for YouBentMyWookie.com and the alias of the Supreme Commander / Ultimate Destroyer. When she isn’t predicting Super Bowl winners similar to Paul the Octopus with the World Cup, she writes in her blog over at MissBonnified.com