Recapping Oscar Night 2011… Or At Least The Stuff That Mattered

Injecting new, fresh blood on the stage in the form of Anne Hathaway and James Franco was definitely a needed breath of fresh air into what I thought was one of the most boring show ever. 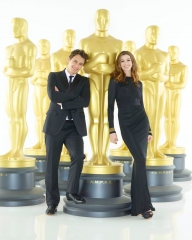 I’ve never watched the Oscars before. I always thought it was boring. The hosts weren’t funny (maybe because I thought they were kinda old) and the movies were mostly stuff I didn’t bother watching. The movies I happen to like didn’t seem to be Academy Award winning material. It’s okay, Waterboy. I still love you.

But this year was different. Maybe it’s because they finally stopped having baby boomers host it and gave the award show a facelift by injecting new, fresh blood on the stage in the form of the gorgeous Anne Hathaway and James Franco. It was definitely a much needed breath of fresh air into what I thought was one of the most boring show ever.

Another first? Melissa Leo’s F-bomb on the Oscars stage. Holy —-!!!

Here’s what I thought.

Anne Hathaway!! Omg, she’s gorgeous and funny! She knows what’s up when she referenced the Oscar pool a lot of people must be playing at home. She also knows what you’re supposed to do when a presenter or host makes a mistake – drink up! She was a great pick to host this award. She’s easy on the eyes even when wearing rather strange dresses (the weird, patent leather blue thing and the equally strange long sleeve sparkly number at the end) and she’s hilarious! She also made hosting look completely effortless.

My favorite Anne Hathaway moment was when she sang about how Hugh Jackman totally went AWOL on her when they were supposed to sing a duet. That was just awesome. She’s a great performer and despite her beauty, she somehow gives you the impression that she’s just the girl next door. 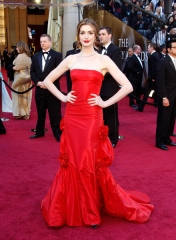 James Franco. Is it just me or did he look like he was in pain the entire time? What’s up with all the frowning and furrowing of the brows? Did no one ever told him that if he made those faces long enough, his face would freeze in that expression?

Maybe he was just nervous. Whatever it was….he just sucked.

Good thing James Franco has a stupendously cute grandma. One of the best parts of the Oscars was when she said “I saw Marky Mark!” and he pretended to lift up his shirt. Oh man….too bad he didn’t.

You know what would’ve been AWESOME BEYOND BELIEF??!!! If Marky Mark was nominated for Best Actor for “The Fighter” and his acceptance speech was performing “Good Vibrations”. Omg….I’d die.

I also loved Kirk Douglas. He was just awesome. “You know….” Definitely one of the funniest presenters of the night. Randy Newman was the funniest recipient of the award for the night. He was friggin’ hilarious. If only all the recipients were so entertaining.

PS22 were so adorable. I’m also kind of sad that those knee high kids can sing better than me. Oh well. That just means I have to practice by hitting up all the karaoke lounges! Oh yeah!

Most of the movies nominated this year are films that I saw. A good number of them are ones I reviews for YouBentMyWookie. That was pretty cool. A few that I can think of off the top of my head are “Animal Kingdom” in which Jackie Weaver was nominated for Best Supporting Actress, “Toy Story 3“, “How to Train Your Dragon” and “The Wolfman.”

Can’t wait to see what this year brings in terms of new movies.

Bonnie N. Clyde is a writer for YouBentMyWookie.com and the alias of the Supreme Commander / Ultimate Destroyer. When she isn’t watching the Oscars and secretly drooling over Anne Hathaway’s many dresses she writes in her blog over at MissBonnified.com