Because you don’t have to wait until Free Comic Book Day to get some comics! Here’s your chance to win an entire BOOM! Studios comic book lot featuring collectible first issues and more!!

We have a great contest this month at YouBentMyWookie where one lucky reader will have the chance to win an entire BOOM! Studios comic book lot featuring collectible first issues and more!! Thanks to the awesome and generous folks over at BOOM! Studios, this contest will feature a grand assortment showcasing some of the best BOOM! Studios titles!!* Everything from G-rated to mature action, adventure, fantasy, sci-fi and horror! 35 comic books total! 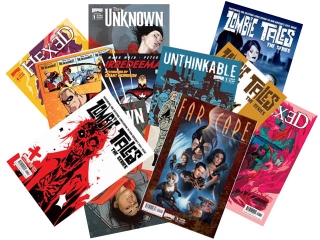 For those who don’t know, BOOM! Studios is an independent comic book company that was named by Wizard Magazine as Best New Publisher in 2005. Known for their innovated and creative marketing tactics, BOOM! Studios was also the first comic book company to provide digital downloads of comic books the same day and date of their release. Recently, they have also partnered up with Disney/Pixar to publish comic books based on their properties such as “The Muppet Show” by Roger Langridge and “The Incredibles: Family Matter’s by Mark Waid and artist Marcio Takara.

This contest is open to all legal residents of fifty (50) United States and those who are 18+. One entry per person. To enter, all you have to do is answer the trivia question below and fill out the entry form. No purchase is necessary. Winner will be selected randomly from all valid and correct contest entries. Contest ends September 15, 2009.

This Month’s Question: In 2007, BOOM! Studios appointed which American comic book writer (who is evil) as their new Editor-in-Chief (Hint: Don’t know? Wikipedia is your friend)

On a side note, congratulations to last month’s winner, Charles Sites from San Juan Capistrano, CA, for winning an original artwork from Michael Lee Ford.

This contest is now closed. A winner will be announced shortly.