We’ve got an awesome Prize Pack from ‘Shark Night 3d’! Win great swag from the movie, plus win three other great horror DVDs! 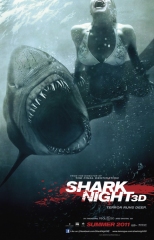 We’ve got a pretty amazing prize pack for you today from the folks over at “Shark Night 3D.” To celebrate the release of the best 3D shark attack movie to hit the big screens since… well, since ever, we are teaming up with the studio to give away a massive prize pack.

First, a little about the movie. “Shark Night 3D” is the new horror extravaganza from Relativity. Directed by David R. Ellis (Snakes on a Plane), the film stars Sara Paxton (Superhero Movie, Last House on the Left), Dustin Milligan (“90210,” Slither), Chris Carmack (“The O.C.”), Joel David Moore (Avatar) and Katharine McPhee (The House Bunny). That’s a hell of a cast for a movie about angry fish!

Now, let’s talk about the swag. Normally, when a movie comes out you get a t-shirt and maybe a poster. Not here. The ‘Shark Night 3D’ prize pack is full of tons of great Shark Night stuff and… because this is how cool they are… they are even throwing in a few more movies for you to enjoy!

No purchase is necessary. The winner will be selected randomly from all valid and correct entries. The “Shark Night 3D” Prize Pack giveaway ends September 30th, 2011.

Question: Would you rather go swimming with sharks or wrestle a bear?