Welcome to the day after Judgement Day.

If there’s one thing this poster wants you to know, it’s that Sarah Connor is back! Arnold Schwarzenegger is also returning as our favorite T-800 with a bunch of new cast additions in Mackenzie Davis, Natalia Reyes, Gabriel Luna, and Diego Boneta. Luna, who is is getting ready to reprise his role of Ghostride from Agents of SHIELD in a new Hulu series, is set to play the new Terminator. While James Cameron is not actually directing the film, he’s producing and the helm is in good hands with Deadpool’s Tim Miller.

The big news is the tag line on the poster: Welcome to the day after Judgement Day. That gives us a sense for what’s going on tone-wise in the film, I can’t wait to find out what that means. It can’t literally be the day after. It’s been 28 years since T2 and everyone has aged enough that you can’t really fake it without CGI de-aging. Hell, Arnold has been a governor and the replacement for Donald Trump on The Apprentice since then!

Hopefully, all will be revealed tomorrow, when the first trailer drops. Terminator: Dark Fate hits theaters on November 1st. 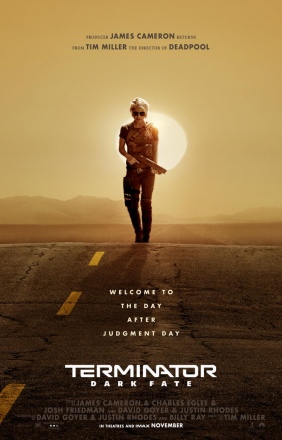