Heritage Auctions has sold the original art from the third issue of Frank Miller’s “The Dark Knight Returns” for $448,125. 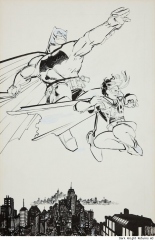 It’s not rare to see vintage Golden Age comics like Action Comics #1 or Amazing Fantasy #15 sell for millions. But today, Heritage Auctions announced that they have just sold original art from the third issue of Frank Miller’s seminal “The Dark Knight Returns” for a staggering $448,125.

This marks the first time a comic art, not a published comic book, as well as a piece of comic book history from 1986 instead of the Golden Age era of the late 1930s, has sold for this much. According to the press release by Heritage Auctions, the sale price was well above the $100,000 estimate they had initially projected.

According to Barry Sandoval, Heritage Auctions Director of Operations, the piece had originally belonged to an unnamed European collector who originally purchased it not long after the release of the comic book in 1986. It now belongs to a new collector, who’s apparently $448,125 poor today than he was a week ago.

Here is the official press release:
The image is the single most memorable image from the entire comic book series and the greatest image from the decade of the 1980s ever to come to market, as well as now standing as one of, if not the most desirable pieces of original comic art from any era to come to market. It is a perfect stand-alone image of Batman and Robin (Carrie Kelley, the first female, full-time Robin) soaring high above Gotham City, emblematic of the entire storyline.

“I’ve always loved that drawing,” commented Miller, when asked before the auction what his thoughts on its imminent sale were. “Danced around my studio like a fool when I drew it. I hope it finds a good home.”

The previous record price for a piece of original American comic book art was set last year when the cover of EC comics Weird Fantasy #29, by legendary artist Frank Frazetta, sold at Heritage via a private treaty sale for $380,000.

“Heritage auctioned Frank Miller’s original art work for the cover of Daredevil #188 for $101,575 last year,” said [Ed] Jaster [VP of Heritage Auctions], “so we knew there were serious buyer’s out there, especially for Miller’s top work. Now we know for sure what collectors are willing to pay. This piece is far away the current king. Nothing else has even come close.”