Did you know that Barbie has the world’s most talked about breasts? 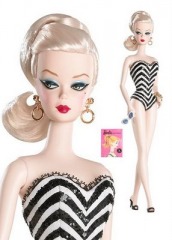 Today is Barbie’s fiftieth birthday. Over the last five year’s she’s gone from European gutterslut to one of the most recognizable pop culture icons in the world. If you are a girl, there’s a good chance that you had at least one in your life and if you’re a guy, there’s a solid chance that you ripped the head off your sister’s Barbie. Sure, those are great memories to have about the world’s most biologically impossible female role model, but do you know about her sordid beginnings as a European hooker? How about the fact that her image is so disorienting to some women’s sense of self that they actually have named a psychological syndrome after her? Well as she tries to expand that size zero diaphragm enough to blow out all fifty candles, let’s take a look down Barbie’s past with some interesting facts and her more memorable film moments.

According to the official story, Barbie was first conceived when Ruth Handler watched her daughter Barbara at play with paper dolls, and noticed that she often enjoyed giving them adult roles. So, she suggested the idea of an adult-bodied doll to her husband Elliot, a co-founder of the Mattel toy company. Not much happened with the idea first, but then Ruth went on a European vacation and found a German Doll named Bild Lilli. The body type was exactly what she’d been thinking so she bought a few and brought them home. After a few tweaks with the help of Engineer Jack Ryan, The doll was altered enough to be a new creation, Barbie. In 1964, five years after unveiling Barbie at the International Toy fair, Mattel finally bought the rights from Bild-Lilli in Germany.

The first Barbie dolls were manufactured in Japan, with their clothes hand-stitched by Japanese homeworkers. Around 350,000 Barbie dolls were sold during the first year of production. Her first outfit was a white and black zebra patterned swimsuit. Today, three barbie dolls are sold every second somewhere in the world and the line is responsible for more than 80% of Mattel’s profits.

Ironically, that German doll that Ruth Handler brought home from Germany was was more than just an adult, she was a hooker.

The ‘Bild Lilli’ Comic-strip character was a prostitute who serviced German businessmen; the doll was sold to men in bars and tobacco shops.

Among the changes that Handler had to make on the doll to make it ready for a US audience was to shave off the poor girl’s nipples! When that was done, Lilli was ready for her new name: Barbara Millicent Roberts, or Barbie for short.

One thing that is pretty interesting to note is that Barbie’s impossible size and insensitive accessories have spawned their own psychological disorder. It all goes back to 1965 when they released a doll named Slumber Party Barbie. Along with having a body size that would kill a real life woman at 36-18-28, the doll also came with a book called “How to lose weight.” One piece of the amazing advice if offered children who wanted to look more like Barbie was that they should simply not eat.

This leads us to what is now called “Barbie Syndrome”, it is a syndrome where girls develop an unhealthy desire to achieve the perfect physique and lifestyle, and strive for an unattainable body. 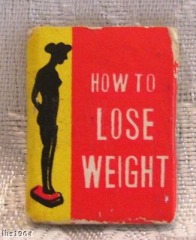 As maligned as Barbie’s body has become over the years, people still pay attention to it. Even now after they redesigned her form to make it more realistic in 1997, Barbie still has the most discussed breasts in the world. Take that Scarlett Johansson!

Here are some other interesting facts about Barbie that you might not know.

– Barbie has had more than 40 pets in her lifetime, including a panda, a lion cub and a zebra.

– There are more than 500 groups related to Barbie on Facebook, including one called Tequila Barbie.

– There are more Barbie in America than there are people.

- In 1965, the only club for children whose membership exceeded Mattel’s was the Girl Scouts of America.

– For two years, the perfect couple, Ken and Barbie got divorced… they eventually reconciled.

– Teacher Barbie was recalled in 1995 because she wasn’t wearing panties.

– Sales of Barbie were outlawed in Saudi Arabia in 2003.

Now that you’ve seen Barbie in all her glory and in some of her secret shame, let’s take a look at some great videos that people have created with her over the years.