The Adventure of a Wookie at WonderCon 09

A three day blast of seeing celebrities, hanging out with geek girls and a shot at defending my Street Fighter title that I’ve held to for over 10 plus years… 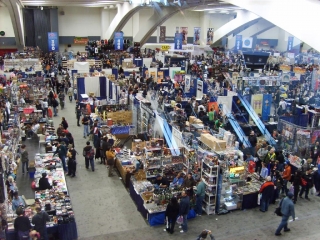 YouBentMyWookie attended this year’s WonderCon in San Francisco to not only bring you the latest announcements and news from some of your favorite shows and films, but to also bring you all the geeky awesome fun that can only be had by roaming the Exhibition Hall of WonderCon 2009.

My adventure at WonderCon began on an optimistic Friday morning where there was sun in the often gloomy and gray city by the bay. Day one was relatively laid back and attendance was moderate with it not feeling too crowded or too dead. Yes, attendance was definitely less than what I was expecting, but WonderCon is still apparently recession-proof as thousands of geeks and non-geeks alike packed the entrance gate at noon impatiently waiting to get inside.

It is not surprising, as it is the year of The Watchmen after all, and comics and comic book movies have gained just enough popularity to elevate itself out of the subculture and into the popular culture.

I spent most of my time on day one roaming the Exhibition Hall to meet and greet as well as to take in all the sights. Similar to NYCC and SDCC, WonderCon has slowly expanded from a comic book convention to a convention that incorporates other forms of entertainment media from video games, TV shows to movies. I first spent some time at the Capcom booth where they demoed the highly anticipated Resident Evil 5.

You know this is a serious game when a “bouncer” cards you before you can enter their booth. While I didn’t get a chance to play Res 5, I will just take Zachary Levi’s, star of the zany spy comedy “Chuck,” word for it when he said in his panel that it controls kind of “wonky.” I guess aside from that, it is the best looking Resident Evil games thus far. Capcom also had four stations devoted to their newly released Street Fighter 4, where con attendees could play and win a mini Chun-Li figure if they win 10 games in a row. 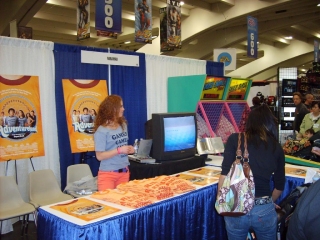 Miramax had a terrific booth setup equipped with two arcade skee-ball machines to promote their new film “Adventureland” staring Jesse Eisenberg (Squid and the Whale), Kristen Stewart (Twilight), Martin Starr (Freaks and Geeks), and Ryan Reynolds (X-Men Origin: Wolverine). Attendees could play a game against their booth babes for a chance to win an “Adventureland” T-shirt. The line was never too long and the booth babes were good but still fallible.

Many comic book publishers filled the Exhibition Hall. DC Comics had perhaps the largest booth with a ton of Watchmen freebies. Other great publishers such as Dark Horse, Image, Top Cow, Aspen, IDW, Oni Press, Boom! Studios, and SLG Publishing had booths, freebies and exclusive signings as well. Surprisingly, Marvel did not have a booth, although they had a few panels discussing the future of X-Men (with Matt Fraction) and the questionable Ultimate reboot. Line editor Mark Paniccia assured the audience that this reboot is for the best as the Ultimatum saga will shake up the Ultimate universe and help distinguish it even further from the 616 Universe which some feared was becoming more dominate. 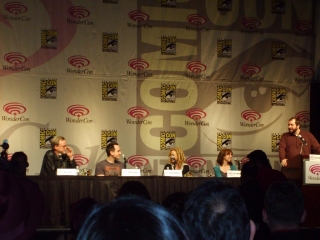 The highlight of the day was perhaps the Wonder Woman DVD premiere along with the premiere of DC’s new animated feature “Green Lantern: First Flight” in the Esplanade Ballroom. The screening was followed by a panel discussion of the film that included both Emmy Award-winning Bruce Timm (Batman: The Animated Series, Justice League Unlimited) and Academy Award-nominee Virginia Madsen (Sideways). The biggest disappointment had nothing to do with the awesome panel or the even more awesome Wonder Woman feature, but by a video appearance of Nathan Fillion of “Serenity” and “Castle” fame. In his clip, Nathan apologized and said that the reason he couldn’t be there tonight because he was “busy filming Serenity 2.” Of course, there is no Serenity 2, and with a chuckle he sheepishly added that he was “…just kidding.”

Collectively you could hear the heart break from the entire audience — such a cruel, cruel joke.

Day one was very much low-key. Day two however, was close to SDCC madness. Attendance literally tripled and every square inch of the Exhibition Hall floor was occupied with families, fans, con virgins, costumed avengers and Stormtroopers. Luckily for me, I had much of the day free and was able to meet up with an old friend, her friend and her uber geek sister and friend who gushed over anything cute, comic booky and Jonas Brothers. 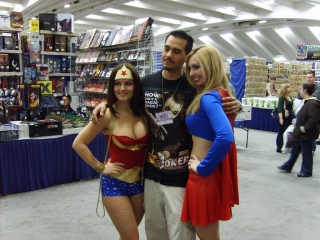 Now I’ve been around a lot of geeky nerdy people in my lifetime, but never have I been in the presence of true geek girls. Sure, there were always the faux geek girls and their geeky boyfriends or the casual geek girls who read Manga and watched anime, but never the full blown kind that fussed over the paint application of their figures and were obsessed with bagging and boarding their comics in order to keep them mint, because near mint just isn’t acceptable.

My friend who is not nearly as excitable, but tolerates comics and geeks, admitted that she is here every year just because of her sister. While we talked and paved our way through the heavy human congestion, her sister and friend trailed behind stopping at every booth to salivate over the geeky goods that were being hocked by the vendors. Occasionally we’d stop and look back to make sure we didn’t get separated. When we did, which was pretty often, my friend would do this weird embarrassing thing where she’d raise her hand in the air and abruptly shout her sister’s name. Sure it was odd, but its effectiveness was uncanny and somewhere among the heavy crowd noise we’d faintly make out a “What?!”

For lunch, we ditched the con for some better food at the near by Westfield mall. Over lemon chicken and kimchi I listened to the girls talk about comics (Civil War, Runaways), the new live-action Avatar movie, Watchmen and stipulations regarding the Jonas Brothers’s whereabouts. Apparently, they are making secret live appearances at random theatre screenings as a way to promote their new 3D movie and to get people to attend multiple screenings hoping to run into them.

After lunch we returned to the con to let the girls shop for comics, toys, pins and Tees. I even picked up a DC Universe Green Lantern figure myself. I was eventually left with my friend’s sister and friend as they waited to watch the Jonas Brothers movie and me with an hour to kill before my press screening of “Adventureland.” 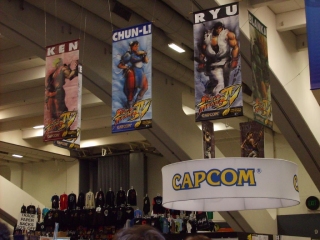 On Sunday, the crowd thinned a little possibility due to the drizzle that rolled in the night before. This time I was meeting up with some of my old high school buddies that I haven’t seen in years. Day three was really more of the same as day two, and while there were moments, the highlight of the day had to have been my friend wanting to challenge me to a game of Street Fighter 4 at the Capcom booth.

Although his challenge may appear friendly and innocent in nature, there’s really a lot more underneath the surface. What he’s after is redemption. What he really wants is revenge — revenge for his defeat at Street Fighter 2 nearly 10 years ago at my hands playing one handed. We both pick Ryu and the fight was on as everyone watched with abated breathe (okay, not really). I take first round easily, because every time he jumped at me I made sure he ate a Shoryuken. Eventually, I won after milking three bouts and my friend was a left humbled yet again but content that he at least made it a match this time.

Afterwords, we shuffled around the Exhibition Hall till noon and my friends saw all they had came to see and we parted ways. Of course, right before leaving, my friend just had to remind me how our match was close and that he had taken one round. At that moment, everyone including his girlfriend unanimously rolled their eyes and said, “He let you win.”

WonderCon 09 will probably be one of the most memorable cons for me, not only because of the Watchmen mania, but because I had the opportunity to also spend it with friends that I haven’t seen in a long time. If WonderCon 09 has shown me anything, it’s that comic book conventions have come a long way from its small and humble origins to the now massive expo of glitz and glamour that we see today. Here’s to hoping that the trend continues, so that all the things geek may be shared and loved by nongeeks alike, because clearly there’s no denying that a little closet geek lives inside all of us.

2 thoughts on “The Adventure of a Wookie at WonderCon 09”