eFX plans to preview several pieces from its new Disney collection during San Diego Comic-Con in July, and at Disney’s first-ever D23 Expo, Sept. 10 to Sept. 13 at the Anaheim Convention Center.

Bringing together the masterful storytelling of Disney with the renowned artistry of eFX Inc., an all-new line of limited-edition collectibles will be unveiled this September, inspired by some of Disney’s classic films and the comic antics of the Muppets.
These new collectibles extend the magic of Disney into pieces that recall the beauty and spectacle that is unique to Disney, beginning with a tribute to the “fairest of them all,” Snow White and the Seven Dwarfs.
eFX plans to preview several pieces from its new Disney collection during San Diego Comic-Con in July, and at Disney’s first-ever D23 Expo, Sept. 10 to Sept. 13 at the Anaheim Convention Center.
The premiere release in eFX’s new Disney line is the exquisitely designed “Heart Box,” inspired by the designs of the wicked Queen in Disney’s first full-length animated feature. Presented to the Huntsman, the Heart Box was intended to be used as proof of Snow White’s demise. As befits the coolly glamorous wicked Queen, eFX’s Heart Box is intricately constructed from solid hardwood and its opening features an imaginative 24-karat gold-plated heart that locks with a dagger.
The Snow White and the Seven Dwarfs Heart Box meticulously recreates the design of the film’s original animation, with rich, vivid colors and the attention to detail

and craftsmanship that is the hallmark of eFX.
The Heart Box sits on an ornate, museum-quality display base that features a sculpture of the wicked Queen by renowned artist David Kracov, with whom eFX has developed a successful, ongoing collaborative relationship. Pre-orders for the Heart Box will begin shortly after Comic-Con, at http://www.efxcollectibles.com. Each “Heart Box” will include an individually numbered plaque and will not exceed 500 pieces worldwide.
“We have long been Disney fans ourselves, so developing authentic, detailed collectibles is tremendously exciting for us,” said Bryan Ono, president of eFX Inc. “With inspiration from Disney films and characters, we look forward to extending the magic of Disney even further into the lives of collectors.”
Upcoming pieces in development by eFX include:
• Full-size, highly detailed “Photo Puppets” of favorite Muppet characters, including Rizzo the Rat, Miss Piggy, and Pépe the King Prawn;
• An incredibly accurate, four-foot replica of Capt. Nemo’s Nautilus from 20,000 Leagues Under the Sea, which will offer features not incorporated in any previous model of this iconic submarine;
• Replicas and collectibles based on such classic Disney entertainment as Mary Poppins, Peter Pan and Pinocchio. 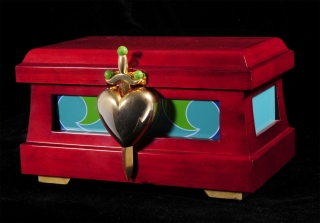