The good folks over at Gentle Giants have released images of their 2010 San Diego Comic Con exclusives! Check em out now!

The good folks over at Gentle Giants have released images of their 2010 San Diego Comic Con exclusives! Check ‘em out:

From acclaimed filmmaker Guillermo Del Toro comes a dark fairy tale about a young girl named Ofelia, who enters a mysterious labyrinth and finds herself at the center of a ferocious battle between good and evil.

The Pale Man; who gorged on excess was banished to a den in the netherworld. Unable to feast on the banquet before him, his body shriveled and his humanity withered away. His only sustenance was the blood of innocents. A meal he relished in hunting himself. He kept a watchful eye over a dagger with a hilt of gold, for he feared it to be the only object that could cause him harm. In truth it’s presence kept him alive. Once the blade was removed, he collapsed unto himself and faded from existence. 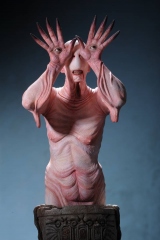 From acclaimed filmmaker Guillermo Del Toro comes a dark fairy tale about a young girl named Ofelia, who enters a mysterious labyrinth and finds herself at the center of a ferocious battle between good and evil.

The Faun was ordered to open the portals throughout the mortal world, including a forest in Spain, one that has stood for thousands of years. It was there that the Faun took root, patiently awaiting the Princess’s return. 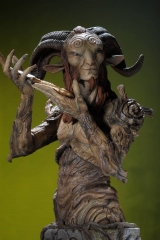 Following the 2009, sold out Boba Fett concept mini-bust is the new original concept art Darth Vader, based on the drawings of Ralph McQuarrie and Joe Johnston. McQuarrie is often credited with developing the look and feel of the Star Wars trilogy. McQuarrie and Johnston worked side by side to develop this version of the evil overlord. Though it is uniquely different than the final film version; the piece still holds true to the final feel of Vader’s timeless helmet and black armor.
This Darth Vader Mini-bust will be sold exclusively at the 2010 San Diego Comic Con. The piece features 3 different interchangeable heads and is a highly collectible limited edition. 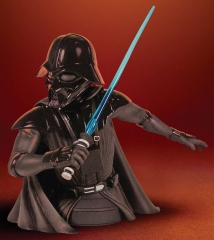 Just like they were when you were a kid, only BIGGER! Gentle Giant is proud to debut their new line of vintage Star Wars Action figure reproductions with the release of this classic Empire Strikes Back Stormtrooper.

Digitally scanned from mint 3 ¾” Kenner originals and reproduced to a substantial 12” tall. Nothing has been overlooked. Injection molded and made of durable plastics, this jumbo figure includes a faithfully reproduced blaster and is fully articulated! That’s not all, this classic Kenner creation comes packaged on a 1980, Empire Strikes Back inspired blister card with a plastic outer clam shell to help protect and display this limited edition convention exclusive!

The prisoner of Azkaban! Lucius Malfoy, the “pure-blood” wizard, and the father of Draco Malfoy. Imprisoned for his crimes as an evil Death Eater, Lucious spent little time behind bars and escaped the prison to once again fight at Voldermorts side

This limited edition mini bust is crafted in high quality poly-stone and features real metal chains and shackles. A fine Harry Potter collectible that is individually numbered with matching certificate of authenticity. 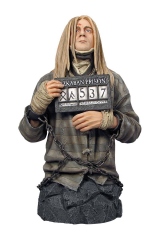