I wonder which costume they’ll be going with?

Until now, the only company making toys based on the Netflix/ Marvel Daredevil series starring Charlie Cox, has been Funko. Now, Hot Toys is announcing that they’ll be getting into the game as well. Unfortunately, the teaser image that they sent out does nothing to let us know which of the four different costumes that the Devil of Hell’s Kitchen wore in the first two seasons of the show that they’ll be using. They also haven’t announced if they’ll be doing figures based around Jessica Jones, Luke Cage, or The Punisher from the TV universe. 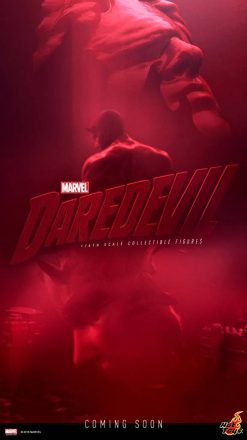