You can see each rib on its torso, every bone on the legs and tail, even the skeletal structure of the face… 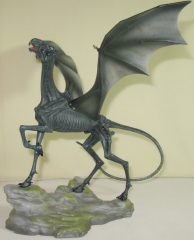 The first time I had the chance to check out a Gentle Giant Thestral, I wasn’t all that impressed. The Bust Up collection that featured it was decent, but the Thestral just didn’t match up to expectations on any level. This statue totally makes up for it. It is really two statues in one; a maquette of the movie beast and an action statue depicting a scene from the film.

Let’s talk about the stand alone Thestral first. It is surprisingly easy to mess up an all-black statue. The first step is great sculpting, which we have here. The artists did a beautiful job on what is essentially an ugly creature. You can see each rib on its torso, every bone on the legs and tail, even the skeletal structure of the face. Of course, backing up the sculpt is the paint job. The way they used the blue-grey tones to highlight the negative shadows was perfect. The only place on the Thestral where the paint would have been in the mouth and nose, but you barely notice it. Accenting the dark statue is natural looking base. It’s nothing fancy, just a rock outcropping with some moss. Anything more would have taken away from the statue.

When you add Harry on to the Thestral’s back, you get a whole new statue. I was impressed with how easily it sets up. There’s no magnets or anything, just a well placed hook. I can also say that Harry is looking better and better in each small scale sculpt that I see of him. Some early versions were real dogs and Gentle Giant knows it. My only real complaint on harry would be his glasses. I know it would be a lot more expensive to make them a separate piece, but the molded into the face look just doesn’t do it for me. That said, this is one of the coolest Potter statues done so far.