I’m going to get right to the point. I loved the GI Joe movie. I know what the reviews are. Ask me if I care about the opinions of people I don’t know.

So those are the few examples of what I’d like to see improved. On to the list of reasons why I eff-ing loved this movie so much, I went to go see it twice. In case you’re wondering why I saw it twice, it’s because I was nose-to-screen the first time around. It says a lot about my love for G.I. Joe to deal with potential monster migraine and possible motion sickness from being that up close and personal with the action scenes. Another reason will be pretty apparent in the following list.

Can you tell I was listening to Bell Biv Devoe at the moment? In case you don’t know what song I’m referring to, allow me to point you to a little song known as “Do Me” by BBD. I love it.

Know what else I love? I super heart movies that spend the majority of their budget on figuring out new and interesting ways to blow stuff up. Who doesn’t?

What was really interesting was their take on nanotechnology. What was even creepier was the feeling that they were reading my mind. For years, I was thinking about the applications of these crazy little ‘bots and their potential in health care. However, not even in my most devious of evil genius Supreme Commander and Ultimate Destroyer moments did I ever think it could be used as a weapon of mass destruction. Those sneaky sneaky Cobras.

Why is it that the bad guys always have the most awesome toys?

So not fair…although those Delta 6 Accelerator suits are pretty sweet. One of the funniest parts for me was when Duke went over the train and Ripcord went through it. Their ensuing conversation after the dust settled showed a possibility of just how great this cast could be if they were in the right hands.

And did you see that friggin’ tricked out Hummer?! I’m not a fan of the vehicle but damn….if I had one like that, I’m pretty sure I’d grow to like it. Again, this goes back to my childhood wish of having a bad ass tank for a car.

I was very impressed by the two little boys whaling on each other during the Snake Eyes and Storm Shadow flashbacks. They are absolutely adorable in their kick ass-edness. I have decided that if I ever have kids, they are going to pwn in martial arts, rock the turn tables, hustle on the pool tables while bringing home killer grades. Oh yes.

My other favorite parts of the movie? All the action scenes (I especially liked the part when Duke and Ripcord are in full Delta 6 Accelerator gear running amok in Paris chasing down The Baroness and Storm Shadow), all the fight scenes between Snake Eyes and Storm Shadow and the crazy sequence when the Cobra Compound gets blown to hell and back. 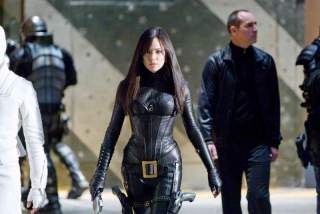 You have two beautiful women rocking skin tight outfits and killer shoes. What’s not to like?

Did I mention they battle it out and kick the bejeezus out of each other? Not that I advocate violence or anything but some bitches just need their ass kicked. Sienna Miller filled out the role of Baroness (and her fantastic costume) pretty well. I especially loved those crazy, super fly, Sarah Palin-ish spy glasses of hers. I really want a pair. That white Bentley Contintenal GT she was driving isn’t too shabby either.

Rachel Nichols as Scarlett wasn’t a bad choice. At first, I wasn’t too sure about the casting because this was the character I loved as a little girl. I didn’t know a whole lot of English back in the day but I knew enough to say:

…and then I proceeded to act out parts of the cartoon I had just watched the day before. There wasn’t a lot of emphasis on dialogue back then for me either but that was because I didn’t understand a whole lot. I was more focused on getting the action part right. Another reason why I loved Scarlett in the movie? The chick knows how to handle her bikes. She’s poppin’ wheelies on that bad boy. I was almost expecting her to do either a Stoppie or a Jesus Christ.

I’m betting there’s gonna be a disproportionately large number of females decked out as Scarlett and the Baroness this Halloween. I might be one of them.

I’ve already got the killer boots so why not make use of them. Oh yeah.

So we know the boys will be showing up in full force to this movie because Sienna Miller and Rachel Nichols are not just hot chicks but they’re hot chicks rocking skin tight suits. I know some girls will be turning out to see Channing Tatum, Marlon Wayans and super fly Asian actor Byung Hun Lee but I know something the ladies don’t know unless they’ve already seen the movie.

It’s called Half Nekkidness. Oh yes. At one point during the movie, Duke, Ripcord AND Storm Shadow are half nekkid. Can I just say the eye candy is delicious? Yes, ladies. I said “half nekkid” and it was fantastic.

As for the audience favorite in my wholly unscientific poll, Snake Eyes might not ever reveal his face but um….that outfit he’s got on doesn’t leave a whole lot to the imagination. In terms of eye candy, this totally works out when you factor in how the lethal, lovely ladies of G.I. Joe get to show off their physical assets. It’s only fair that the boys get to do the same. * ahem * I’m so not complaining. Can you tell?

So what do I think we’ll see in a sequel? First of all, Storm Shadow is so not dead. He fell into below freezing water. It’s called cryogenics. There’s no way someone as evilly ninja as him could die in those conditions.

Secondly, I’m rather curious to see what Zartan’s gonna do because before he transformed, he said something along the lines of wanting to be able to control his own brain. Uh oh. Did the Cobra Commander make an Epic Fail mistake by going through with changing his appearance and setting him loose? Hm…..

Before I end this piece, I’d like to address a comment I heard during opening night. I’m walking out of the theater dreaming about Snake Eyes when I heard two guys griping about something. They were ripping apart how Rex’s voice changed after he put on the second headpiece thingy when he turned into the Cobra Commander. I stood there in disbelief as they seriously whined about how it should’ve stayed the same, why did it change, that was so lame blah blah blah omfg the world is going to end as we know it.

People’s voices will change when they put on and/or change head gear. I know I don’t sound the same when I have a Shoei helmet on my head versus an Arai versus having no helmet confining my super glorious glossy hair. I call it Darth Vader Syndrome. Don’t know what I’m talking about? Peep this and considered yourself properly schooled.

I wish I could’ve projected this clip on a screen right in front of their faces that night. Ugh. I can’t handle whiny boys.

This concludes Bonnie’s review of ‘G.I. Joe: Rise of the Cobra.’