If I made that cake and someone tried to slice into it, I’m not sure if I would start to cry or grab the knife and start getting stabby.

It’s probably better at this point if I just shut up, let you look at the amazing pics and read how she brought this bad boy to life. 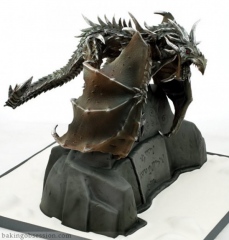 The cake itself and the dragon was my attempt to reproduce a sculpture from a set of Elder Scrolls V: Skyrim Collector’s Edition (a computer game by Bethesda). I started making it using photos I found on the internet. Later, when we purchased the set, I realized that my pretty birdy was getting way too big, almost twice the size of the statue. To make the whole thing proportional, I had to scale up the size of the cake itself. It was made of four 13″x18″ sheets of chocolate cake, soaked in strawberry syrup, and sandwiched with bittersweet strawberry ganache (5 lbs of chocolate). Alduin’s core is made of modeling chocolate. His scales, horns, and spikes are made from gum paste. The double-sided wings are half-and-half (fondant/gum paste). His eyes are Swarovsky crystals. At first, I planned to make them edible from isomalt, but these ruby-like gems were so perfect in their brightness and size, so I changed my mind. I knew Tim would never ever let anybody have a bite from Alduin, so a couple unedibles seemed OK.

This cake was created by Vera from Cakeobsession