YBMW’s Transformed and rolled out to Botcon 2010 to find out if the fan convention still had “The Spark.”

YBMW special correspondents Joey Snackpants and Tom Croom transformed and rolled out to Botcon 2010 to find out if the fan convention still had “The Spark.” Thankfully for us, they took some pics and did a write up of the show for all the Transformers fans who couldn’t attend.

Before you read on, you have to understand one very important thing: we (Tom Croom & Joey Snackpants) are friends who met at a fan convention over ten years ago thanks to The Transformers. It was at a small anime event in Orlando, Florida when we discovered that we both subscribe to the idea that the war between the heroic Autobots and evil Decepticons actually took place somewhere in the Midwest circa 1980-something.

We also both agree that Beast Wars sucks and never happened.

That said, the two of us have braved dozens of conventions over the years and have always viewed Botcon as “the holy grail” of conventions to attend. Think about it… a geek event focused on a very specific fandom (Transformers) backed by the multimillion dollar corporation that owns it (Hasbro). The proverbial “fan convention” with a budget! We finally got the chance to attend the event this past weekend and (sadly) we discovered (SPOILER) that there is no Santa Claus. 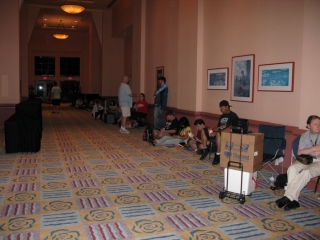 You know you’re on Disney property when there’s already a line!

On Saturday (June 26, 2010) at 5:45 AM the line had already formed full of geeks (ourselves included) to buy the autograph tickets for Peter Cullen. We found ourselves in line at that ungodly hour as numbers thirty-five and thirty-six respectively. By 6:30 AM, the line had grown to at least sixty people. Since there was a noticeable lack of convention staff keeping dibs on the queue – a group of people devised a way to move up to a spot in line better than ours… they started a new line on the other side of the door.

THUS begins the failure of Botcon: If you know you are going to have people in line for something this early then have staff on hand to advise and mediate. Even mid-size amateur run conventions know better. This point is exacerbated by the fact that the tickets in question (general admission) are NOT available online in advance of the show. You can ONLY buy them on site. In short: planning and staffing FAIL. 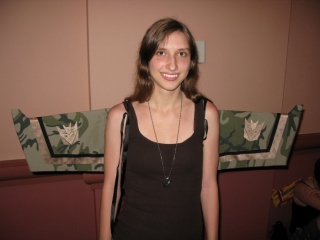 We’re used to seeing anime girls dress up with angel wings and the like; Deception jet wings? AWESOME.

Time went by fairly quickly thanks to conversations with other fans in line and (in part) due to our respectively jacked up metabolisms pumped full of donuts and energy drinks. Around 8:00 AM, Botcon staff finally made an appearance and organized the lines for Peter Cullen and General Admission entry. According to the staff, there were approximately 240 autograph tickets available for that morning to meet the legendary voice of Optimus Prime. Two hundred tickets were for the top tier ticket holders (who paid upwards in the amount of $300 to be there) and the other forty for the general admission tickets.

Here’s where BotCon becomes BotFAIL yet again… General Admission tickets are only $18 for a single day adult admission to the event. So if you get there early and get in line (like we did) that should be all you need to pay to get in, right?

WRONG. Here’s how they gouge the attendees:

* Peter Cullen was set to sign autographs for only 2 hours that Saturday morning from 9:00 AM to 11:00 AM.
* The convention opens to the public at 10:00 AM which is too late to be in the official line for Peter Cullen, so:
* The convention offers an “Early Bird” general admission ticket… which is increases the admission price 175% to $50. Seriously.
* Once you have your “early general admission” pass – you then get the privilege of spending ANOTHER $25 for an autograph ticket. This final tidbit, by the way, is listed NOWHERE on the convention’s website.

So what should have been $36 for a couple of fans who braved the convention hotel at the butt-ass crack of dawn wound up costing $150. BotFAIL is all about the almighty dollar, folks, and NOT the fans.

The morning adventure did prove fruitful (albeit expensive) when we both met Mr. Cullen. In our line of work, the two of us get the chance to meet a number of celebrities. Early on, we learned that there is a risk associated with meeting these folks since sometimes the person who played/was the voice of a childhood hero can turn out to be less than pleasant. Thankfully: Peter Cullen was not one of those people. Both of our interactions with him were personable and he conveyed himself as a professional and a class act. He even held his composure when Joey Snackpants presented his item to be autographed.

NOTE: For those of you that aren’t aware, Mr. Cullen has provided the voice for Eeyore in almost all of Disney’s Winnie the Pooh productions since 1988.

The rest of the convention consisted of one large vendors room and a panels room upstairs from that. Entertainment for the day was limited to those two areas. Here are some of the highlights: 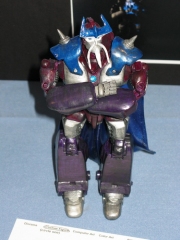 There were a number of tables in the back corner of the vendors room with custom figures and artwork featuring the Transformers. The tables were only partially full of submissions which (we assume) is due to last minute advertising that Botcon put out. Failure of corporate owned conventions aside, many of the pieces were truly inspired (like the custom Alpha Trion pictured above.) 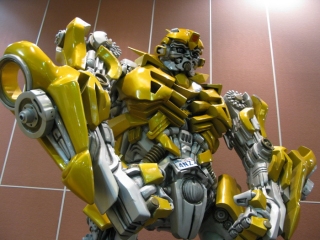 In the back of the vendors room was a life-size statue of Bumblebee from Michael Bay’s Transformers. It stood next to the Bumblebee Camaro – which is not to be confused with the Bumblebee Camaro parked out front. In short: if you were a little kid looking for the “real” Bumblebee, you’d get confused really quickly. If (big IF) Tom Croom & Joey Snackpants ever return to a Botcon, it will be with a yellow Volkswagen Beetle. 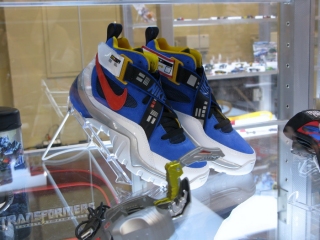 Hasbro had a play area set up to promote the Hunt for Decepticons line of toys that is coming out this year. The area, designed for kids, seemed to be attracting more men in their mid-thirties than young impressionable boys and girls… but hey – who are we to judge? Aside from that, attendees were treated to the 1,000th repaint of all the toys they were putting on the market this year in glass cases. The shoes (pictured above) did catch the eye of Joey Snackpants, though. He has bid on them on eBay many a time… and lost.

STAN BUSH
Stan Bush was the voice that screamed the battle cry for thousands of children of the eighties with his songs The Touch and Dare! on the Transformers: The Movie (1986) soundtrack. As a guest, Stan is very approachable and always excited about meeting fans of his music. He was on hand all weekend promoting the music he contributed to the new hit video game Transformers: War for Cybertron. 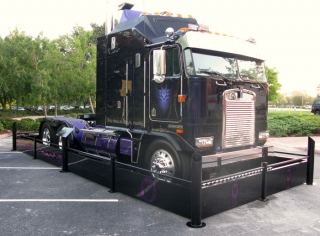 Out front of the convention, fans could take pictures with a number of vehicles painted and made to look like popular Transformers. The key piece to the display was a massive truck that was painted to resemble the popular Stunticon Motormaster. The owners had a booth in the convention hall with photos of the construction project from beginning (finding a scrapped truck) to end (the awesomeness on display at Botcon.) You can see some of it for yourself on their website: www.decepticonmotormaster.com

THE VENDORS
The selection of goods for Transformers fans was pretty decent. Collectors could find toys from their childhood, open or still in the box, for fair prices. Mixed in with the Autobots and Deceptions attendees could also stumble upon some anime merchandise, Mighty Morphin Power Rangers, Voltron and even comic book t-shirts. Tom Croom spent about $300 on some new Optimus Prime figures, while Joey Snackpants only bought comic book t-shirts in order to “stick it to the man.” The only Transformers purchase Joey made during the convention was from someone trying to sell a used Japanese Masterpiece Edition Megatron in the parking lot – which he got for a very good price.

As much as we both were looking forward to seeing Peter Cullen speak at his 2:00 PM panel, we just couldn’t make it. Exhaustion coupled with the fact that the ONLY other thing to do was walk in circles in the vendors room for four hours finally got the best of us – and we left.

Our advice to the promoters of Botcon? Quit calling your event a convention… because it isn’t. Until you have more events to keep your attendees active and interested, Botcon should promote itself for what truly is: an average trade show.

Our advice to the attendees of Botcon? Expect more from your events! A number of people pay over $300 in advance to attend a show that offers little more than a glorified shopping experience. For that much cash, we expect more than just exclusive toys; we expect to be entertained as fans at a convention for a fandom we love.