I hate zombies. This fact has been so well documented on YBMW so I’m not going to beat a dead horse…unless it’s coming after me because it wants to eat me. 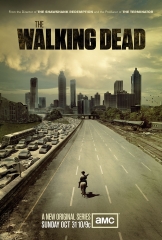 I hate zombies. This fact has been so well documented on YBMW so I’m not going to beat a dead horse…unless it’s coming after me because it wants to eat me.

I’ve heard so much about this new AMC show via my Twitterfeed and Facebook news. I put off seeing it because there is nothing enticing about shuffling, stinky undead critters who want to eat me. Maybe it was because we were too tired from a full day of trying to hunt down a wedding venue but my fiance (that’s RIGHT!!! I’M GETTING MARRIED!!!) suggested we watch this new show to see what the furor was all about.

The main reason why I hate zombie movies is because the focus is on trying to get me to pee my pants from fright as much as possible. I don’t know about you but I’m not interested in wearing Depends when I want to watch a scary movie. I dislike shock factor. I like a good story. Sadly, most zombie movies I’ve come across are heavy on the former and nonexistent on the latter. There’s only so much I can handle and so many different ways of seeing a zombie eat a human before I feel like my mind’s gone numb.

Enter AMC’s “Walking Dead.” Yes, there are zombies. There’s no getting around it. The title of the show is, after all, “The Walking Dead.” I know they’re there because I see them ambling about or blissfully eat their lunch of freshly slaughtered human but they aren’t the focal point of the series. They’re like….deadly, ghastly, super disgusting scenery that effectively lends a horrible pall of despair over this scary new world.

The characters are the primary emphasis and they are showcased well with exceptional storytelling. Way to go, AMC. “Mad Men” put you on the map and “Walking Dead” has you running full steam.

The writers’ ability to immediately draw you in and never let you go is their trump card. They know how to tell a story, get you hooked on the characters and involved. The part when Rick went into the city (WHAT WERE YOU THINKING, RICK??!!! DIDN’T YOU SEE ALL THE EMPTY CARS ON THE OTHER END OF THE FREEWAY? You’re a cop!! Where was your deductive reasoning skills then??!!) and encountered the horde of Walkers almost made me have a heart attack.

I felt like I was right there with him, freaking out and trying to stay alive while surrounded by ghouls interested in literally tearing me into pieces. Another jewel of the show is how ingeniously they have their characters escape death’s grip time and time again.

I’ve figured out a few things now that I realized Season One is over. I can’t believe I’m about to say this but I’m so sad there was only a few episodes and I’m eagerly waiting for the next season. Without further ado, I call this my “Walking Dead” Survival Guide.

1. Pay attention to what the camera focuses on. If it shows a tool box spilling its contents on the floor, I knew those would come in handy later….and sure enough, it did.

2. Don’t get too attached to anybody! I wanted to cry when some of the characters died.

3. Never assume. Nowhere is safe. No. Where.

So now that I thoroughly made myself paranoid and started thinking the appearance of human zombies is right around the corner, here’s what I’m hoping Season Two will address.

1. I wonder how badly Merle is going to screw the merry band of survivors.

2. How did the outbreak begin?

3. If all zombies do is eat and think about eating, when do they poop? After all, what goes in must come out, right? If they don’t poop, it stands to reason they’re eventually going to explode, right?