Check out the artwork for Jesse Hernandez’s amazing new Mecha Azteca Vinyl Figure. And, don’t forget to check out his latest episode of Vinyl Addiction After The Jump!

Jesse Hernandez is one one of the most innovative vinyl artists out there right now. The only thing that would make his ridiculously sweet Azteca line of figures perfect is if they were sitting in that blank spot on my shelf, but they sell out just about as quick as hotel rooms at Comic Con.

Jesse sent over the artwork for his latest masterpiece: Mecha Azteca. It is AWESOME! It has all the charm of his previous figures, but it brings in all the greatness of the 1980’s Japanese Mechas that make me drool. If there was one thing I’d do to make this figure even better, it would be to make it so the fists would shoot out as projectiles… Tranzor Z/ Mazinger style! 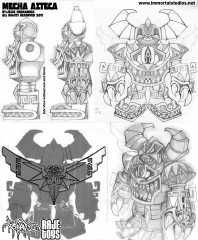 If you are heading to WonderCon this weekend, make sure you go see Jesse at the Kuso Booth where he’ll be selling the super low 85 pcs edition of his Southern Mictlan vinyl. 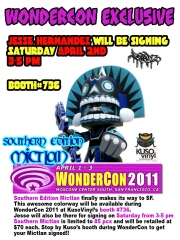 Finally, whether you are new to vinyl or a long time collector like me, you are missing out if you aren’t watching Jesse’s series “Vinyl Addiction”. This week’s episode just hit. Watch it below!